Thought-provoking ideas about the future

The subtitle reads: “The Importance Of First Grain To World Economic & Political Stability.” Indeed, these words do hint at the theme, but upon settling into this masterfully written, easy-to-read book by Milo Hamilton, the essence of When Rice Shakes the World proves to be much more.

The book is extremely thought provoking. It quickly moves beyond the physicality of the small grain itself into the realm of how rice will ultimately affect the future of the entire world and the people involved in all aspects of the industry. For example, many of the comments published in the first few pages support this notion, emphasizing the book’s personal impact on the reader.

An Arkansas rice producer says, “I now realize the potential influence of it [the book] when I was fielding questions from my son, Caleb, and Josh, my son-in-law who is working with us now on the farm. These were questions raised after they came into contact with his [Milo Hamilton’s] ideas.” 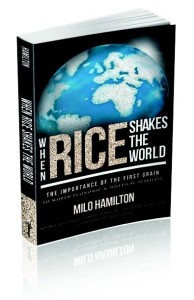 In Beijing, China, an Agricultural Economist and Rice Specialist notes, “When Rice Shakes the World is worth reading for all those who want a better understanding of trends in the world rice industry. It also presents some of the problems that China must face in dealing with all the change that lies ahead.”

Because water has been such as issue in parts of the U.S. rice-growing regions, I was particularly intrigued by Hamilton’s discussion of the relationship between rice and water. He quotes a Zen proverb, “When you boil your rice, know that the water is your life,” then says, “Likewise, when you boil your rice, as this proverb is saying, understand the essence of your existence is in the water that you are using to grow and to prepare your rice to eat.”

Hamilton enticed me to think beyond our own borders with these excerpts: “Rice is grown from rivers in India, Pakistan, and Southeast Asia, and those rivers flow from the ice that melts in the mountains above them. The one who owns the mountains sets the rules of melting ice and rice. Clearly, water matters….In Asia, rice and water are inseparable. To deal with growing populations, with their increasing urbanization, rising income, and concerns over food safety, the nations of Asia must deal with the water issue.”

And, in “Asia, which has made self-sufficiency in food grains a number one priority, next to its military strength,” the notion of buying rice equating to virtually buying water – one of three choices that Asia has if it doesn’t have enough water – is definitely “a big change.”

When Rice Shakes the World is divided into sections titled: Rice And Water, Joined At The Hip; Trade Route To A Better Future; As Goes Rice, So Goes China; The Tricks Of The Trade and ‘You Can’t Fail,’ that lead up to Hamilton’s concluding thoughts – Time For Reflection On What This Means. But, no spoiler here….

If your interest has been piqued, I invite you to read When Rice Shakes the World for yourself and think about the questions that it raises and the insights into the relationship between rice and water that you may not have considered before turning the first page. When Rice Shakes the World is available on Amazon for $14.50 and will soon be available as an audio book

About The Author – Milo Hamilton
• Senior agricultural economist and co-founder with Kevin Ries of Firstgrain.com.
• Involved in the rice markets for 32 years.
• Managed rice procurement and risk management for Uncle Ben’s Inc. for 18 years.
• A journalist, speaker and book author: Professional Farmers of America – 1976-81.
• English Literature degree, Stanford University.
• Agricultural Economic degrees from the Universities of Missouri and Minnesota.
• Lives in Austin, Texas, with his wife, Jan, and his little Pomeranian, Penny.
• Enjoys spending time with his children and their families.