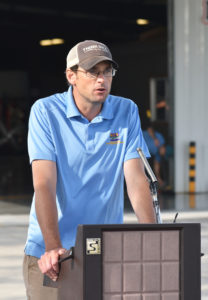 The Louisiana rice crop is having a challenging year, but good weather in June could result in a decent harvest, according to the LSU AgCenter rice specialist.

A new product, Anvol, has proven to be effective at preventing nitrogen losses, particularly on acidic soils, Harrell says.

“It should be an improvement over PVL01 as far as ratoon capacity,” he says.

The variety also has better blast disease resistance, and it matures seven days earlier than PVL01.

The new Provisia variety will be available for commercial production next year. This year, seed is being grown to plant 50,000 to 60,000 acres, he says.

AgCenter plant pathologist Don Groth says the Amistar Top fungicide didn’t work as well as hoped last year. He says the product is the only fungicide labeled for a second crop.

More studies are being conducted this year on Amistar Top to determine how its effectiveness may be improved.

It’s likely that the fungicide needs to be applied earlier before the canopy of rice plants is fully developed, he says.

Two new experimental products are being tested. “I’m hoping we get some different modes of action,” Groth says.

Some farmers are using herbicides usually applied on soybeans on their rice crop. “From what we’ve seen this year, do not do that,” Webster says.

His studies this year include testing fertilizer mixed with Loyant herbicide and applying the combination in a flooded field surrounded by soybeans. “We don’t know what it will do after it hits the water,” Webster says.

AgCenter soybean specialist Boyd Padgett says 67% of the state’s soybean crop is planted compared to 90% at the same time last year. The five-year average is 85% planted at the end of May.

Soybeans were submerged in some areas of the state that received heavy rainfall. Soybeans at the Dean Lee Research Station near Alexandria were under water for two days, but they survived because the weather was cool and cloudy afterwards, he says.

A new fungicide for Cercospora blight on soybeans is being tested that looks promising, Padgett says.

AgCenter entomologist  Blake Wilson says Dermacor seed treatment remains the best option for rice water weevil control, but the product Fortenza also can be effective against weevils. But unlike Dermacor, Fortenza does not control stem borers.

Apple snails are becoming more widespread, but they are confined to the Mermentau and Vermilion basins. So far, the pest is more of a problem for crawfish farming than rice, he says.

Stink bugs will become a problem as the rice crop matures, Wilson says. Spraying is recommended when three stink bugs are found in 10 sweeps during the first two weeks, and afterwards 10 stinkbugs per 10 sweeps.