And the winner is …

The University of California’s Rice Yield Contest may provide bragging rights to the top producers, but it also has proven a good way to collect production data from high-yielding growers.

“It’s a lot of fun, but we’re starting to learn some stuff,” says Bruce Linquist, UC Cooperative Extension rice specialist. “We’re starting to get a decent amount of data to start to analyze.”

As part of the contest entry, growers have to note variety, seeding rate, planting date, nitrogen regime and weed program. For 2018, the Sacramento Valley was divided into three contest regions to account for different growing conditions.

Tops in their class 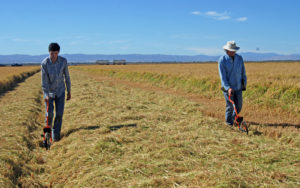 Josh Shephard, who farms east of Biggs, had the highest yield in Region 1 with the variety M-105, harvesting 119 hundredweight (264 bushels).

And Sean Doherty, who farms near Dunnigan, had the highest yield in Region 3 and the highest overall yield of 135 cwt (300 bushels) per acre. He planted M-209.

The name of the top yielder from each region was put in a hat, and Shephard’s name was drawn during recent UC winter field meetings as the recipient of a John Deere Side-by-Side.

2018 marked the fourth year of the contest, which attracted 21 entrants from throughout the Sacramento Valley, Linquist says. More than 30 growers actually entered, but some decided not to move forward once they put the combine in their field.

“There’s a bit of pride,” he says. “We only advertise the winners. We don’t put names by anything lower.”

The competition proved so popular last season that because of limited resources, UC Extension had to turn away some growers who had entered more than one field. All of the harvests of contest fields are supervised by Extension or Natural Resources Conservation Service personnel.

It also marked the first year a side-by-side was offered as a prize in addition to a specially designed ball cap. In years past, each regional top yielder only received the cap. The potential to earn a vehicle, which was jointly sponsored by several ag companies, seemed to boost interest significantly, Linquist says.

High yields were a team effort

First-time entrant Doherty says he treated his top-yielding contest entry much like his other rice fields. In fact, another one he entered in 2018 had the third-highest yield in the contest.

“I just have a really good team that performs amazingly well together. That’s what did it for us,” Doherty says.

Among members of his “winning team” were Luz Calderon, rice planting and harvest foreman; Colin Hays, who did a “phenomenal job” managing rice irrigation; and Gary Miles, a pest control adviser with Colusa County Farm Supply.

Across all of his fields this season, Doherty says, his yields were up about 5 to 6 100-pound sacks from 2017. He credits much of the yield increase to Mother Nature.

“If you do everything perfect in a rice field and get good weed control and water just perfectly, you’re just controlling about 25 percent of what the crop is going to be,” he says. “The rest is up to Mother Nature. We just had a favorable year.”

One trend seen in 2018 was below-average yields in Region 1.

“Yields were really down, and I don’t know if it was due to the smoke,” Linquist says, referring to extensive Northern California wildfires. “The top yield was 102, and I’m sure they can get higher than that. In talking to the driers, they were down, too. They were closer to the Carr Fire (near Redding). I’m wondering if they were more impacted by that.”

Although M-209 dominated the top entries in 2017, he says they saw good production from a number of varieties in 2018. Another observation was good stand establishment led to higher yields.

“Where you had very uniform stands, yields were really good,” Linquist says. “It seems like you’re wanting to shoot for about 70 tillers per square foot or slightly higher.”

Interestingly, Linquist says, the top field in each region was planted to rice in 2017. Although fields that had been out of rice for at least a year performed well, they weren’t the top yielders.