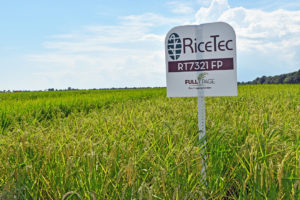 RT7321 FP is one of four FullPage hybrids that RiceTec plans to release on a limited scale in 2019. They are resistant to two IMI herbicides from Adama — photos by Vicky Boyd

In 2018, 11 growers from South Texas to Northeast Arkansas got a sneak peak of the new FullPage herbicide-tolerant production system by hosting on-farm field-scale trials, says Mason Wallace, RiceTec technical services manager. The fields, all planted to the RT7321 FP hybrid, ranged in size from 40 to 80 acres.

Yields were comparable to the highest-yielding Clearfield hybrids, which share some of their genetic background with the FullPage releases, he says.

As far as management, Wallace says growers who are used to managing Clearfield hybrids should not have few problems making the transition to the FullPage system because of program similarities.

One of the releases — RT7321 FP — has similar yield potential, standability and disease package as XP753. Unlike Clearfield hybrids, RT7321 FP is paired with Preface herbicide.

RT7521 FP, another FullPage release, is about five days later than RT7321 FP and has agronomic traits similar to XP760.

“Both are excellent hybrids, and they’re a couple of our highest yielding hybrids,” Wallace says of XP753 and XP760. “They’re pretty much interchangeable with our FullPage hybrids. They’re slightly different but they’re very similar.”

As with Clearfield hybrids, FullPage hybrids were developed using traditional breeding methods and are not genetically modified.

Hybrids are made by crossing two dissimilar parents, resulting in an improved progeny.

RiceTec designed the FullPage system specifically for its hybrids, resulting in improved tolerance to the herbicides.

In six experiments across the Mid-South rice belt in 2018, researchers applied four times the labeled rate of Preface and Postscript herbicides to a FullPage hybrid pre-flood and against post-flood without a crop response, says Andy Kendig, Adama herbicide development lead.

“We wanted to demonstrate they really had solid tolerance in the FullPage hybrids,” he says. “We had zero crop response and no yield response. Farmers won’t be applying 4X rates, but if you have cool weather or you have boom overlap, we demonstrated you don’t have to worry about those difficult environmental conditions.”

Preface herbicide, which contains the active ingredient, imazethapyr, is labeled at 4-6 ounces per acre for use only with the FullPage system. Kendig recommends the higher 6 ounce rate as part of a resistance-management program and to reduce the need for post-flood clean up treatments. In addition, he generally recommends adding crop oil concentrate, but the actual adjuvant will depend on other tankmix partners.

To date, RiceTec researchers have not seen a crop response from various herbicides and tankmixes applied to FullPage hybrids, and they continue trials as new products come to the market. Postscript, which contains the active ingredient, imazamox, is designed for post-emergence clean-up.

As with any herbicide program, growers should start with a clean field, Kendig says.

The FullPage system comprises two applications of Preface, which provides post-emerge and residual control of some of the most troublesome grasses including weedy rice, red rice and barnyardgrass.

Kendig’s preferred program starts with clomazone. He may add quinclorac or propanil, depending on whether legume weed species are present, with the first Preface application. He’ll follow with a second Preface application preflood.

Kendig also recommends a sound stewardship program, which includes two Preface applications, overlapping residual herbicides and rotating out of rice after one season.

Because residual of Preface herbicide may carry over in the soil to the next season, rotating to a different rice system is not recommended because of potential crop injury.

“The situation with herbicide-resistant weeds in rice is sobering,” he says. “We’ve been talking about resistance for 30 years. Something that really bugs me in rice is ALS-resistant red rice. What’s wrong with putting out 55 pounds per acre of soybean seed? That’s a wonderful rotational crop for resistance management and agronomics.”

As IMI herbicides, Preface and Postscript belong to the ALS herbicide class. 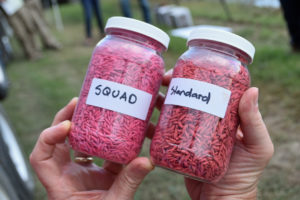 All FullPage hybrids will come treated with Squad seed encrustment.

New to the FullPage system is Squad seed treatment. Seed treated with Squad will have the currently offered seed treatments plus an encrustment, which creates a smoother seed surface and allows for better movement through the planter.

It also gives the grower better seed singulation for different drills in the rice-growing region. But it means growers should recalibrate their planters if they’re set up for other hybrids, Wallace says.

“Don’t just throw it in your drill and use the same settings because you’re going to burn through your seed very quickly,” he says. “It’s going to take away the abrasiveness of the seed.”

Like most other RiceTec hybrids, Wallace recommends growers start with a rate of 450,000 seeds per acre, and they may vary it depending on individual field characteristics.