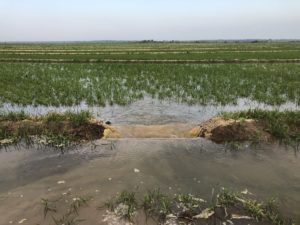 As the nation’s No. 1 rice producer, Arkansas can have an outsized effect on U.S. rice production one year to the next, depending on fates largely tied to the weather. And 2018 is shaping up to be anything but simple — or predictable.

“The rice crop looks great at the moment, but it’s been a difficult season,” says Jarrod Hardke, University of Arkansas Extension rice agronomist based in Stuttgart. “One of the coldest Aprils on record followed by the hottest May on record has a lot to do with it.”

As of last week, nearly 100 percent of planned rice acreage throughout the state had already emerged, with growers rating 70 percent of the crop in “good” or “excellent” condition, according to a June 4 report from the U.S. Department of Agriculture’s National Agricultural Statistics Service.

But cool weather and rain in April hindered the application — and likely the effectiveness — of herbicides, which may have consequences later in the season, Hardke says.

“Emergence on early planted rice was extremely delayed by the cold April weather and so we didn’t benefit much from early residual herbicide applications,” he says. “Once we got to May and things warmed up and dried out, they stayed dry and our herbicides didn’t work very well again. Many acres also needed to be flushed to relieve the drought stress conditions and to activate residual herbicides.”

The June 2 storm that affected several areas throughout northeastern Arkansas, particularly St. Francis County between Colt and Forest City, appears to have done relatively little damage to rice growers, although a full assessment of crop damage is incomplete.

“The area that was most impacted was relatively small,” Hardke says. “I know there were some levee issues, but it was a smaller scale and a not all rice in the area has gone to flood yet.”

One measure of the extremity of the 2018 season is the DD50 program, which measures days during which the temperature rises about 50 degrees Fahrenheit to predict the growth of rice.

“Quite a swing. What a season,” he says. “And we’re not even halfway through.”