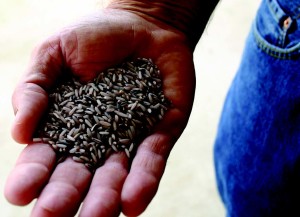 South Louisiana producer Fred Zaunbrecher holds a handful of Blanca Isabel that was grown on his farm.

In 1998, Dr. Milton C. Rush, a plant pathologist with LSU AgCenter, was looking for a rice variety with a natural resistance to sheath blight. In doing so, according to LSU rice breeder Dr. Steve Linscombe, Rush introduced a purple grain line into his program that he thought might have higher levels of sheath blight resistance.

What ultimately occurred was something else entirely. As noted on purpleblackrice.com, when Rush crossbred a common Louisiana long-grain variety (Cypress) and a purple/black kernel variety from Sri Lanka (Hitan Kitan), he developed a new, high-yielding, early long-grain purple rice variety that he named Blanca Isabel. It is unique in that it has the cooking qualities, texture and taste of long-grain white rice and the health benefits of purple rice.

“The rice is purple simply because it has a gene for a purple grain,” Linscombe says. “The purple grain trait came from one parent, and the grain remains purple all the way through. The AgCenter attempted to market the line, but no one expressed an interest. When that is the case, the inventor is given approval to develop commercialization for the product, and LSU released the rights to Dr. Rush.” 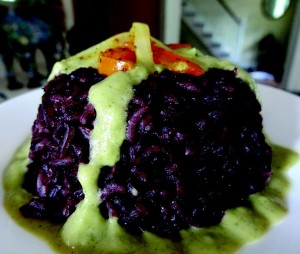 Even after it has been cooked, Blanca Isabel maintains its brilliant purple color.

Health Benefits
After retiring from LSU, the former plant pathologist opened Rush Rice Products, LLC, a family owned company in Baton Rouge, to produce and market Blanca Isabel. In addition to its attractive purple color, the variety typically has high levels of the same antioxidants found in blueberries, green teas and red wine.

Claudia Rush, Dr. Rush’s daughter, says, “Blanca Isabel is very heart-healthy, can help lower cholesterol and, because of its high antioxidant levels, can help protect against carcinogens. Additionally, the rice has been shown to be good for diabetics. Research done by the Pennington Biomedical Research Center indicates that Blanca Isabel can be a good diabetic diet choice as it doesn’t raise a diabetic’s sugar levels the way white rice does.

After her father passed away, Claudia and her family have continued to grow the business. Claudia points out that they primarily sell the purple rice as a milled, packaged product that is milled and packaged in the Crowley/Rayne area.

“Right now, Blanca Isabel is being sold in stores throughout south Louisiana and in a few stores in Texas and Mississippi,” she says. “People can buy Blanca Isabel online through Amazon or can call us directly. We also are beginning to sell Blanca Isabel in bulk to restaurants and industrial food facilities.

“My dad worked at the Rice Research Station in Crowley for 39 years, and developing such a high-quality, healthy rice was his dream,” Claudia says. “He made us promise that if the business takes off that we will keep the rice production in Louisiana. He was a big supporter of Louisiana rice farmers.”