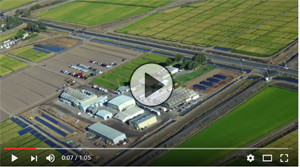 Find out what you missed at the recent California Rice Field Day.

California rice producers attending the recent annual Rice Field Day at Biggs received some good news and some bad news when it comes to weed control.

As soon as the 2017 use season, they could have a new herbicide—Butte, a premix of benzobicyclon and halosulfuron from Yuma, Ariz.,-based Gowan Co. Benzobicyclon, an HPPD herbicide, would bring a new mode of action to U.S. rice and help manage herbicide resistance.

With only about a dozen different active ingredients to chose among in California, growers continue to grapple with increasing herbicide resistance in weeds, said Kaseem Al-Khatib, a University of California, Davis, professor who heads the UC rice weed control project. Of those 12 or 13, six are ALS-inhibitors and have the same mode of action.

Throughout his tenure, Al-Khatib has recommended looking at alternative management regimes, such as maintaining optimum water levels or spraying only the levees and perimeters. But herbicides continue to be the first and last line of defense, he said.

New product on the horizon 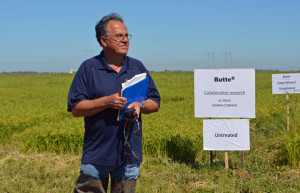 Al-Khatib and his predecessor at UC Davis, Albert Fischer, have looked at benzobicylon for the past several years in different herbicide programs and at various rates and timing.

Butte is in the latter stages of registration with the Environmental Protection Agency and could possibly be available in time for the 2017 season, said James Brazzle, research and development with Gowan. The product is undergoing concurrent registration review with the California Department of Pesticide Regulation.

When asked what type of water hold the product would carry, Brazzle said that was one of the items currently being negotiated. Because the product binds readily with soil particles, he expected the water-holding period would be on the shorter side of the spectrum.

Introduction of Rogue, which would be a liquid formulation of benzobyclon and halosulfuron, to the Mid-South rice market would likely be at least a year later.

Butte is expected to be labeled at a rate of 7.5 to 9 pounds per acre, but Al-Khatib recommends the higher rate to slow resistance from developing.

In trials where Butte was used alone, it provided excellent control of sedges, ducksalad, monochoria and sprangletop. But grass control was only fair to good, and redstem control was poor. Other trials examined follow-up applications of additional materials or the inclusion of a granular herbicide to try to improve control of the weeds on which Butte is weaker.

He was quick to point out that Butte should not be viewed as a stand-alone product but should be part of an overall program that includes different modes of action.

Ultimately, the program should be based on the weed population density and presence or absence of herbicide resistance in the specific weeds.

Is that weed resistant? Have it tested. 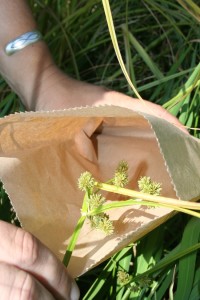 UC program tests rice weeds for herbicide resistance at no cost to the grower. Photo courtesy of UC Davis

To help growers determine which weeds in their fields may be resistant to herbicides and to which ones, the university offers a free testing program.

By following a few simple steps, growers collect seeds from the suspect weeds and send them to the Rice Experiment Station in Biggs for testing. Until a few years ago, the program only tested for the herbicide to which the grower suspected resistance.

But now it tests for resistance to all of the active ingredients registered in the state, Al-Khatib said. Participating growers receive a report showing the herbicides to which the suspect weeds are resistant and those that are still effective.

The information is kept confidential. If the data is reported, it is done in a way that protects privacy.

UC researchers also continue to look at production systems other than water seeding to see if they may help manage resistant weeds. A direct-seeded system, such as used in the South, would allow growers to use other herbicidal modes of action not currently available for water-seeded rice, Al-Khatib said.

“The purpose is to break down the weed cycle, but it’s a system that encourages grass infestations,” he said. “In the 1920s, we moved to permanent flood to control the grasses.”

In a multi-year trial, Al-Khatib and colleagues are evaluating planting depths between 0.5 and 2.5 inches as well as various herbicide programs and timings.

Initial results showed that weeds adapted to drier conditions, such as barnyardgrass, sprangletop and watergrass, did better under direct seeding. Aquatic weeds, on the other hand, were almost eliminated with direct seeding.

Although initial results also showed the system may result in a 15 percent yield loss, he said it could be a tool growers usede to regain weed control in troublesome fields.