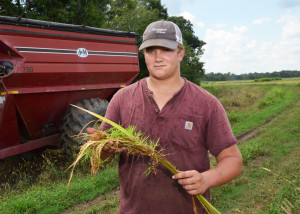 Many Louisiana rice and soybean producers were looking at decent crops before torrential rains in August flooded many fields and created mud bogs in others.

Kurt Guidry, an agricultural economist with Louisiana State University’s AgCenter, puts initial flood losses to the state’s agriculture at $110 million. But that could climb as damage continues to be assessed.

According to surveys conducted by LSU Agronomist rice specialist Dustin Harrell, about 70 percent of the first rice crop had been harvested before the rains. Many growers had planned to ratoon their fields or produce a second crop as the rice plants resprouted.

With many rice fields underwater for weeks, the potential for a ratoon harvest has diminished.

Of the fields that weren’t harvested before the rains, as much as 25 percent could be lost.

Sammy Buller, who was farming on his own near Port Barre for the first time this year, was looking at good crops.

About one-third of his 280 acres of rice lodged with the heads underwater for several days. Much of the grain sprouted in the heads.

Rice that has sprouted but doesn’t have leaves could be sold, although it wouldn’t be acceptable for packaged rice.

Buller was able to put his combine in his field Aug. 24 and harvest the rice that wasn’t sprouting. Of the harvestable crop, he said yields were 38 to 40 barrels, or 61.5 hundredweight to 64.8 cwt, per acre.

He doesn’t hold much hope for a second crop. “We’re just going to lick our wounds and hope for a better crop next year,” Buller said in an AgCenter news release. 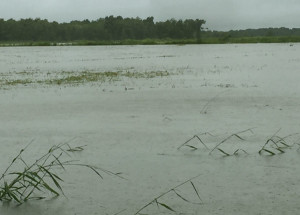 Before the floods, Louisiana growers were expecting to harvest more than 1.2 million acres of soybeans. Much of that acreage is a total loss due to flooding.

Soybeans don’t like wet feet and can survive only two to three days underwater before succumbing.

Even if the plants survive, they’re not out of the woods. Waterlogged soil can result in dealth because roots are sealed from getting air, suffocating the plants.

Adler Stelly, of Vermilion Parish, said his crop is underwater again. It was flooded the first time shortly after planting. Of 800 acres, he estimated that flooding has submerged 500 acres, and he said the outlook is not good for grain quality.

“It’s got every kind of disease you can think of. It’s going to be tough,” Stelly said.

Stelly, who also runs a shrimping business, said the floodwaters have pushed shrimp out of Vermilion Bay. He’s also worried about the effects on his crawfish crop because of stagnant water that is receding slowly.

Stelly had helped evacuate 150 head of cattle in Pecan Island, including some of his own.

Christian Richard, of Indian Bayou, said he hadn’t been able to assess the potential losses on his rice and soybean farm.

“I don’t really know because I had a lot of fields I couldn’t get to,” he said.