California rice planting takes off after a delayed start 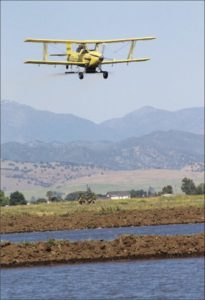 After a late start, California rice planting is finally ramping up in the Sacramento Valley.

Late spring rains kept fields wet and farmers from working their ground, shortening this year’s planting season, with some acres expected to be left fallow because farmers won’t have enough time to plant them.

Colusa County grower Kurt Richter, who seeded his first ground in Maxwell last week, said once the rain stopped, several days of hot weather and high winds made all the difference.

“We all were sitting around waiting to get started, but the weather shifted so dramatically that we were able to go from not being able to do anything to being able to do everything all at the same time,” he said.

The rush to plant has led to “a very high demand for water” in his area, Richter said, as farmers all around him were trying to put water on their fields in preparation for seeding, with some of them having to wait days for the availability of the water.

Although his fields in Maxwell are dry enough to work, Richter said another 1,700 acres of farmland he has in Colusa remain mostly underwater due to flooding from the Sacramento River and Butte Creek.

He hasn’t been able to work that ground and said he likely won’t be able to plant about 1,000 acres in that area by June 1, after which it is considered too risky, because late planting pushes harvest into the rainy season. June 1 is also the final planting date for those with crop insurance who plan to seek compensation for prevented planting.

In its report in March, the U.S. Department of Agriculture estimated prospective rice plantings in the state at 485,000 acres, down from 506,000 in 2018. California farmers planted 445,000 acres in 2017, when they faced similar weather problems that also prevented some acres from being planted.

Jim Morris of the California Rice Commission said the commission expects about 500,000 acres of rice will be planted this year, “which is pretty close to recent years.” He added that even though late storms pushed back planting during the early part of the season, “the weather has smoothed out nicely.”

Yuba County grower Paul Baggett said he thinks prospects for rice acreage have improved since the USDA March report, with many fields drying out and being planted. Unlike 2017, when higher rice stocks kept downward pressure on prices, the current market for rice is favorable for farmers, he said, so there’s more incentive to plant as much as they can. He said he thinks acreage could reach as high as 510,000 this year.

“Most people are planting,” Baggett said. “I think most are optimistic that the pricing will be stable and will be profitable.”

Having sown his first field late last week, Baggett said he expects to complete planting by May 15. Ideally, farmers would like to be done by the first week of May, he said, but added “it’s unlikely it’s going to happen for everyone” this year.

Because his family runs a vertically integrated business that also involves drying, milling, packaging, storing and marketing rice, Richter said he needs to farm “every piece of ground we can, to push rice into our mill so we can maintain our customer base.”

“We have a secondary business that we have to maintain, so there’s more at stake for us than just what’s out in the field,” he added.

‘Way behind on ground work’

Being “way behind on ground work,” Yolo County grower Mike Hall, who farms in the Yolo Bypass, said he has several thousand acres that are “in jeopardy of not getting planted.” With much of the bypass still underwater, he said some of that acreage will be planted late or to a different variety such as wild rice, which has a shorter growing season than medium-grain. But he noted switching varieties is not always feasible, as it’s hard to gain contracts for certain varieties.

“Wild rice is limited, so it’s not like you can switch the whole bypass to wild rice,” Hall said.

That some rice-growing areas in the bypass will not be planted this year could further help the market outlook for medium-grain rice, the predominant variety grown in the state, Sutter County farmer Mike Daddow said. But he noted some of that lost production could be offset by more acreage being planted due to improved water supplies, as there will be “minimal water sales” this year by rice farmers, who in the past have fallowed land so they could transfer water to those who lack it.

Being about two weeks behind schedule, Daddow said there’s always concern about how his yields will be affected. Not only will harvest be later, which increases the chance of his crop being rained on in the fall, but farmers also begin to change production methods. He noted that when planting got late in the past, he would reduce his fertilizer, which keeps plants vegetative longer, lengthening the growing season. By backing off on nitrogen, Daddow said, he’ll “take a little hit on yield,” but his crop will mature several days to a week faster.

If pressed for time, Baggett said he may forgo disking, a step he has skipped when preparing fields, although he noted that’s not a shortcut he can use in all fields, particularly those with more adobe soils.

Another concern with the shorter planting window, Daddow said, is the impact on related businesses—from aerial applicators to seed and fertilizer companies. Baggett pointed out that the aqua-ammonia fertilizer rice growers use—which is applied right before water is applied to fields—is mostly locally produced, and with planting being compressed to a two-week period, there could be shortages and wait times for the material.

“It’s a lot of stress on the system,” Daddow said, “and it does it again in the fall when you’ve got to put rice in the dryers.”

Richter said delays caused by the rain cost him some seasonal employees he had lined up, many of whom found other jobs that allowed them to start work immediately. Running a “larger-size operation,” he said he needs to deploy a lot of tractors, especially in a year like this when he’s scrambling to get fields planted on time.

“We need people driving those tractors,” he said.

Ching Lee is an assistant editor of Ag Alert. She may be contacted at clee@cfbf.com. This article first appeared in AgAlert.