California’s snowpack measures only about half of average 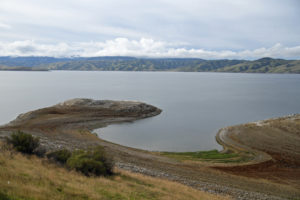 San Luis Reservoir holds about 82% of average storage for this date.

Despite storms that dumped several inches of snow on the Sierra Nevada over March, California’s snowpack only remains slightly more than half of average. That’s important because it supplies about 30% of California’s annual water needs as it melts in the spring and early summer.

The California Department of Water Resources recently conducted its fourth manual snow survey of 2020 at Phillips Station south of Lake Tahoe. It showed 42.5 inches of snow with a snow water equivalent of 16.5 inches, or about 66% of the April average for the location.

The snow water equivalent measures the amount of water contained in the snowpack, which provides a more accurate forecast of spring runoff. Measurements from the 130 electronic snow sensors, scattered throughout the state, indicate that the statewide snowpack’s water equivalent is 15.2 inches, or 53% of the April average.

In addition to the manual snow surveys and automated snow measuring sites, DWR is collaborating to augment the measurements with satellite and air-borne remote-sensed data, according to a state news release. These experimental data products provide additional detail to the spatial patterns of snow water accumulation in the watersheds that helps inform and guide forecast runoff quantities and timing. Such data gathering will be a key adaptation strategy as climate change impacts continue to mount.

In one year, California has gone from having the fifth best recorded snowpack to one of the 10 worst.

The state’s six largest reservoirs currently hold between 82 % (San Luis southeast of San Jose) and 125% (Melones east of Modesto) of their historical averages for this date. Lake Shasta, California’s largest surface reservoir located north of the state’s rice belt, is 98 % of its historical average and sits at 79% of capacity.