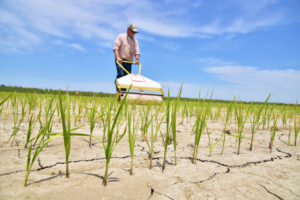 The season started with good planting conditions in March. “But the cool weather set in after emergence, and everything just slowed down,” says Louisiana State University AgCenter Extension rice specialist Dustin Harrell.

By now, he says, rice plants should be at the four- to five-leaf stage and ready to flood, but most are at two to three leaves.

Harrell doubts the weather will affect this year’s crop in the long run.

“As long as we’re not having freezing temperatures, it’s just delaying the growth and development of the rice crop,” he says.

Some farmers are changing their herbicides to avoid injuring young rice, and flooding fields has been delayed because plants are shorter than usual.

AgCenter Extension associate Keith Fontenot, with the AgCenter rice verification program, says some farmers who water-seeded their crop are having to replant because high winds caused seed to drift to one side of a field.

“We did see some leaf tips dried out from the wind and the cold,” Fontenot says.

April so far has been wetter than normal for many parishes, and that could delay the soil from warming, Grymes says.

Bruce Schultz is an assistant communication specialist with the LSU AgCenter in Crowley, Louisiana.