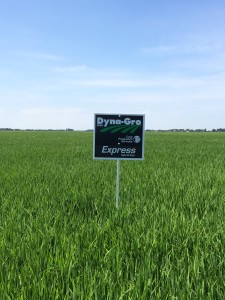 For the past two years, breeders with Crop Production Services have quietly been working to develop rice hybrids with improved agronomic traits.

The first resulting commercial hybrid, named Express, is set for market introduction in time for the 2017 season, says Randy Ouzts, CPS U.S. rice manager. It will be marketed through CPS’ Dyna-Gro business unit.

“We named it Express because in many instances emergence to harvest is only 90 days,” he says. “We’ve been able to ratoon rice as far north as Jonesboro (Arkansas) because of how quickly it comes off, and we’re hoping for some even farther north this season in our plots.”

Several other Dyna-Gro hybrids and varieties are in the pipeline.

This season, Express is being trialed in more than 50 large-scale on-farm plots ranging from 20 to 60 acres this season, Altogether, CPS has about 2,500 acres of Express throughout the Mid-South rice belt as well as near Belle Glade, Fla.

Express appears to have exceptional milling quality and low chalk similar to Cheniere, and milling yields have often been in the 60/70 range. It also averages 24 percent amylose, a starch responsible for rice kernel stickiness and cooking quality. That compares to Roy J, a relatively new long-grain release from the University of Arkansas, which averages 22.4 percent.

The higher the amylose content, the fluffier the rice cooks up. Processors producing parboiled products also seek medium- to high-amylose varieties. Sushi rice, known for its stickiness, is low amylose.

Express’ 90-day maturity is generating a buzz among growers and consultants. One field in Arkansas quickly went from green ring to boot, catching many by surprise. The plants also are sporting 10- to 12-inch panicles.

The much shorter growing season means growers won’t have to pump as much water to produce a crop, Ouzts says.

“If you plant April 15, you might be cutting rice before the first of August and it takes hurricanes out of the equation,” he says. “If it produces 150-160 bushels dry but you pick up 10-20 cents (premiums) for the milling quality, yield expectation become less of an issue for most growers. The earliness coupled with the grain quality should really make a difference.”

The secret to the grain quality stems from the breeding technique, which uses a three-line system. Hybridization involves cross-breeding two genetically dissimilar individuals, often resulting in improved offspring known as an F1 hybrid. With the three-line CMS, or cytoplasmic male sterility, system used by CPS, another cross is involved that restores fertility to the hybrid. No genetic engineering is used in making the crosses.

The three-line CMS process, while more difficult and time consuming than the traditional two-line system, results in more stable genetics. That equates to much more uniform grain quality.

“We’ve had meetings with quite a few mills and buyers, and so far all are on board — they’re looking for this kind of quality for sure,” Ouzts says.

As a hybrid, Express only requires about 90-100 units of nitrogen compared with about 150 units or more for conventional inbred varieties. It also has an improved disease package compared to conventional varieties.