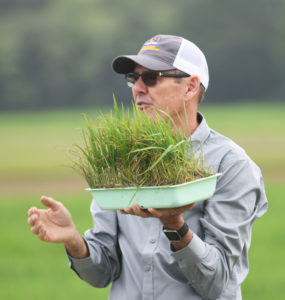 Those funds bring the total to $1.5 million set aside from Colombian Free Trade Agreement money that must be designated for rice research in Louisiana. Interest generated by the account will be used to fund an endowed chair to enhance efforts at the rice station.

Don Groth, AgCenter plant pathologist and resident coordinator of the H. Rouse Caffey Rice Research Station, is the first recipient of the chair, and the money will be used to pay for research.

“It took years of hard work by a lot of people to get this established,” Groth said.

Research money on all levels is decreasing, Groth said, and funds for the chair will be a significant boost to research at the rice research station.

Mike Strain, commissioner of the Louisiana Department of Agriculture and Forestry, said the Truth in Labeling Act approved by the legislature this year protects the rice market against products that are called rice but are actually other vegetables cut into a rice shape.

Betsy Ward, USA Rice chief executive officer, said the law, along with similar legislation in Arkansas, influenced a company to change its product from “cauliflower rice” to “riced cauliflower.”

She said a recent 120,000-metric-ton sale of rice to Iraq was the result of efforts by several individuals, including U.S. Rep. Ralph Abraham.

Abraham said he met with the Iraqi trade minister recently. “Everybody here had a direct influence on getting those Iraqi tenders,” he said.

Abraham also said the trade agreement with Canada and Mexico is pending. “We need it ratified,” he said.

Current and past members of the Louisiana Rice Research Board pose with a check for $1.5 million during the annual LSU AgCenter H. Rouse Caffey Rice Research Station field day on June 26. The funds will be used for an endowed chair. The board designated funds from the Colombian Free Trade Agreement to be used for research. The board had already approved $1 million and provided an additional $500,000 at the field day.

Trade with those two countries is worth $1.5 billion to $2 billion for Louisiana agriculture, he said.

Bill Richardson, LSU vice president for agriculture, said the 2019 legislative session went well enough for the AgCenter that it can move beyond a standstill budget.

Also speaking at the field day was Richard Fordyce, administrator of the U.S. Department of Agriculture Farm Service Agency.

Farmers across the country have had to deal with adverse weather this year. “There are a lot of parts of the country with excessive rainfall that’s made it tough to get fields planted,” Fordyce said.