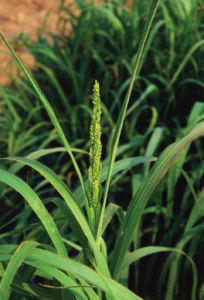 Dow AgroSciences recently unveiled the name of the new broad-spectrum rice herbicide it anticipates launching in 2017 or early 2018 — Loyant herbicide with Rinskor active.

Actual availability will depend on Environmental Protection Agency registration, says Hunter Perry, Dow field scientist at the Southern Research Center in Greenville, Miss. The company is still evaluating its plans for the California rice market.

“Through several studies here at Dow AgroSciences and with university cooperators, we’ve learned that Loyant does an excellent job controlling these resistant biotypes that have been reported in the field,” Perry says.

A few of the weeds on which the herbicide is weak are Texasweed, fall panicum and many of the morningglory family, although it does control pitted morningglory, he says.

University trials
Jason Norsworthy, a weed scientist with the University of Arkansas, has conducted trials with Loyant both as a stand-alone and in tankmixes for two seasons.

“It’s very effective on almost every broadleaf that we’ve looked at,” he says. “It’s very strong on sedges and is probably one of the strongest products I’ve seen on rice flatsedge. And I’d say on the grass side, barnyardgrass would really be its strength.”

In his trials, Loyant also had good activity on herbicide-resistant barnyardgrass and rice flatsedge, Norsworthy says.

Eric Webster, a weed scientist with Louisiana State University’s AgCenter, has only had the herbicide in trials with water-seeded rice for one year, and he says he likes two years of results before making grower recommendations.

But preliminary data show Loyant provides broad-spectrum control of many of the most troublesome broadleaf weeds and sedges as well as barnyardgrass and broadleaf signalgrass. Webster says the product also has activity on many of the aquatic weeds, such as pickerelweed and ducksalad, that plague water-seeded fields.

One thing he has noticed is Loyant produces ALS-like symptoms on treated weeds — the plants remain green and appear to still be alive after application. But when you touch them, they break off at the ground because they’re dead. “So that’s going to take some getting used to,” he says.

Broad application timing
The product has a broad application window from two-leaf rice up to booting, Perry says. “We’ve found that application at pre-flood before permanent flood is where Loyant has the greatest level of performance,” he says.

For an early post-emerge application, he says growers may want to tankmix the herbicide with a residual herbicide since Loyant activity is primarily foliar. Dow AgroSciences researchers also have examined Loyant with Clearfield varieties and Clearfield hybrids and found good tolerance to the new herbicide. They have not been able to evaluate Loyant’s compatibility with the Provisia system, another herbicide-tolerant rice program that has yet to be commercially launched.

Loyant’s active ingredient, Rinskor, belongs to the Herbicide Resistance Action Committee’s Group O, which includes several synthetic auxins. But the Dow herbicide binds differently than other Group O rice herbicides, such as 2,4-D and triclopyr, to auxin receptors in the plant, Perry says.

As with all herbicides, he says stewardship will be key to prolonging Loyant’s utility for the rice industry.

“One of the biggest points we’re trying to drive home is Loyant herbicide needs to be used in a full-season rice weed-control program,” Perry says. “We can’t build herbicides overnight. We need good stewardship in order to prolong the lives of Loyant as well as the current chemistries on the market that are still very effective.

“Barnyardgrass and rice flatsedge are weeds that have taken full advantage of some of these repeat applications of specific chemistries, and it’s resulted in broad-scale resistance across our area.”

Dow plans to hold a series of Mid-South technical tours this summer to educate the market on how Loyant performs in large research plots, he says.