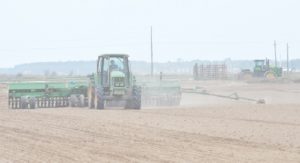 The rice market finally received some positive fundamental supply and demand news over the past few weeks with the release of U.S. Department of Agriculture’s Planting Intentions and World Supply and Demand Estimates reports. Probably the most positive news came from the Planting Intentions report, which showed a 533,000-acre reduction in long-grain rice acres for 2017. Leading the way was Arkansas, which expected to plant 360,000 fewer long-grain acres than in 2016.

For a market that has struggled with large supplies and stocks, the potential for lower production in 2017 on fewer acres can be definitely viewed as a positive. Adding to this positive momentum was the World Supply and Demand Estimates report, which increased export expectations for long-grain rice by 2 million hundredweights. Although the pace of export sales has been a trouble spot for the market for much of the current marketing year, it appears they have improved marginally over the past couple months.

Long-grain milled exports trailed the previous year’s pace by 22 percent a month ago and more than 25 percent two months ago. Being curently down only 15 percent definitely shows slight improvement in demand.

Market is slow to react

Although it is undeniable the market has received some improved fundamental supply and demand news, it is also undeniable that there has been little to no price reaction. The September 2017 rough rice futures contract closed at $10.32 cwt on March 30—the day before the Planting Intentions report was released.

As of April 19, that same contract was trading at $10.57 cwt, only about a 20 cents cwt improvement. Much of this inability to move prices higher is likely linked to a couple of issues. First, favorable conditions have created an extremely quick pace to planting in 2017. As of April 17, 55 percent of the U.S. rice crop is estimated planted. This compares to 46 percent in the previous year and a five-year average of 37 percent. Even more dramatic is the pace of planting in Arkansas.

Currently, it is estimated that Arkansas has about 67 percent of its rice crop in the ground compared to 52 percent in 2016 and just 38 percent over the previous five years. This quick pace and the generally favorable planting conditions have raised concerns of producers planting more acres than indicated in the Planting Intentions report.

The other issue is the lingering concern about export demand despite the slight improvement seen over the past couple months. This is particularly true with long-grain milled rice. A lack of export business from historically large and important customers still leaves plenty to be cautious about overall export demand.

Although this is welcomed, it will take a significant improvement over these levels to get producers excited about the price outlook for 2017. This hasn’t materialized yet in the market, but I think there is still some upside potential, particularly if actual 2017 acres stay at the levels projected in the Planting Intentions report.

Despite the continued worries on the demand side, I think the reduction in acres and resulting reduction in production is enough alone to create upside potential to a $17- $18-per-barrel level for long-grain rice ($10.50-$11.11 cwt).

Anything above that will need additional improvement in export demand. If we don’t see the reduction in acreage as is currently expected, then I think this market is likely destined for the $16- $17-per-barrel range ($9.87-$10.50 cwt) that we have been in for the past two years.