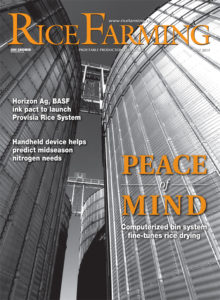 Knowing a load could face rejection if it was too high in moisture, Mike McCarty was diligent about sampling his grain bins 2 feet down to take readings. He would dry the grain down to 13 percent moisture at that 2-foot level.

But by doing so, the Osceola, Ark., producer also understood he was over-drying the bottom half of the bin, which could read as low as 9 percent moisture. That meant he was losing potential profit.

“Our whole operation goes into the grain bins, and we always struggled with how to control moisture,” McCarty says.

All that changed with the installation of AP Innovations Advanced Grain Management system in every bin three years ago. He also subscribes to API’s service that provides personalized bin monitoring 24/7.

“It’s like having another partner in the operation because this used to worry us all the way through to when we started hauling out, which is a huge part,” McCarty says. “We now have someone who is monitoring and checking for us. To me, it’s peace of mind, not to mention the electricity savings.”

API has remote monitoring systems on grain bins that store more than 30 million bushels of rice, corn, soybeans and other crops throughout the nation’s rice belt, says Aaron Little, an API salesman in Stuttgart, Ark. Each bin is fitted with a series of cables that hang from the roof down to the floor. Sensors placed every 4 feet along the cable measure grain moisture and temperature or temperature alone. A 30,000-bushel bin, for example, will be fitted with two grain moisture/temperature cables and two temperature cables.

On the exterior of the bin is a Plenum Sensor, which measures the temperature and pressure of air as it enters the fans into the bin. All of the data for the bin site is relayed by a small radio antennae to the farmer’s computer server, where he or she can access the information via smartphone, tablet or computer.

Users simply set a moisture content goal, such as 13 percent, and the program draws from real-time data and continuously calculates equilibrium moisture content, shutting on or off the fans accordingly.
Some growers, such as McCarty, also subscribe to the personal monitoring service because they want the added insight only a human can provide, Little says.

For about 1 cent per bushel of capacity, API provides 24/7 bin monitoring for the entire year from initial filling until the grain is shipped. Farmers can fill the bin as many times as they want for the single payment, he says.

“The monitors are pretty automated, but the difference is we’re watching weather fronts and different things off the coast,” Little says. “Things like that are what the computer can’t do. It’s going off what’s happening right now. It’s not forecasting into the future.”

A grower, for example, may be drying rice but a cold front is forecast. API will alert the customer that he or she may be better off shutting fans down rather than introducing cold air into the bin and making it difficult to finish drying, Little says. API then adjusts the program to ensure the fans do not cool the grain while trying to dry it, he says.

Jeremy Jones, a partner in England, Ark.-based Zero Grade Farm, says the family-owned operation had been considering the monitoring system for some time. But seeing it being installed in bins at a Kaplan, La., farm and talking to Mike Shook, co-owner of API, sold Jones.

Zero Grade Farm has used the system on about 40 percent of its bins for the past three seasons and has experienced improved grain quality. The bins use just ambient air to dry the grain.

“It was taking a lot of time coming out to the farm, turning the fans on and the fans off,” Jones says. “It also was getting hard to get the rice to uniform moisture from top to bottom. We’d overdry the rice on the bottom, which translates to poor milling quality. We’d be mixing 10 percent rice with 13 percent rice. Now when we ship our rice, our moisture is consistent from top to bottom and within 0.1 to 0.2 percent.”

Zero Grade, which grows all hybrids, also has seen grain quality improve to where it received premiums on much of its 2015 crop. Jones says he can’t credit the monitoring system for all of the improvement, but he says it definitely played a role.

Jones subscribes to the personalized monitoring service, which sends him a daily report on the status of each bin he can view on his smartphone, tablet or computer. He says the 1-2 cents per bushel he pays for the service is well worth it.

“They’re that partner I need because I’m busy with other things,” Jones says. “It’s like somebody looking over your shoulder all the time.”

Based on three seasons’ use, he says the family is seriously considering retrofitting the remainder of their bins with monitoring systems.

Before McCarty installed the monitoring system, he ran each bin fan an average of 90 days from Sept. 1 until November when he started moving out rice. That amounted to 2,000-2,200 hours per fan per year, and he has 24 bins. Like Jones, McCarty relies on ambient air to dry his rice.

At the same time, the system is providing more uniform drying. McCarty says for the second straight year, the rice coming out of his bins has averaged within 0.2 percent of 13 percent moisture.

“We try not to cut anything over 20 percent, but you still run into some wet spots,” he says. “The cables in the bin helps us know what’s going on with the rice coming out of the field outside of what our combine monitors are reading.”

McCarty says the milling yield of his 100 percent hybrid crop also has improved.

“I’m not saying we’re getting a premium all of the time, but we’re not getting nearly the deductions that we have in the past,” he says. What used to cost him 10 cents per bushel in downgrades is now closer to even.
In the past, McCarty also had an issue at least once a year with staining caused by hot pockets in his bins. That was when he had 1,600 acres of rice. Now the family has 4,000 acres of rice, but they haven’t experienced any staining with the API system.
“If the driver used to call me, it made me nervous in the days of staining,” he says. “Now I don’t worry when they call because we don’t have the staining issue.”

McCarty purchased the cabling system outright and opted to subscribe to the personal monitoring service. As part of the package, he received a desktop computer directly connected to a bin-monitoring screen. Just as the bins are situated on a farm, the screen features the same placement of bin icons.

By clicking on an icon, he can see whether the fan is running and the overall grain moisture. Should a fan go down, McCarty receives an alert, via text or call, telling him exactly which bin has a problem.

Having all of the information at his fingertips is a huge labor savings, since the operation has bins near Osceola, Luxora and Keiser.