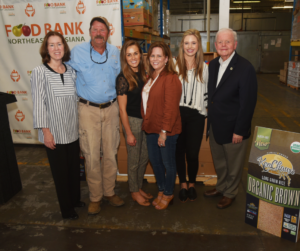 Two days later, the Kennedy Rice Mill in Mer Rouge donated 1,800 pounds of rice to the Northeast Louisiana Food Bank based in Monroe.

This year commemorates the 29th anniversary of National Rice Month, sponsored by USA Rice, and it is celebrated with events around the country.

Natasha Curley, of the Second Harvest Food Bank, said rice has become an important part of the organization’s program. “I love rice because I’ve seen firsthand the amount of good that rice can do,” she said.

The Northeast Louisiana Food Bank distributes more than 4.8 million pounds of food through 60 partner agencies and children and senior programs. Jean Toth, food bank director, said 69,000 people in northeast Louisiana are food insecure. “It means they worry about not having enough food to eat,” she said.

John Owen, chairman of the Louisiana Rice Promotion Board, said in Monroe that rice works well for food banks because of its nutritional quality and long shelf life.

Rice farming has environmental benefits by providing waterfowl habitat, and it contributes to the diversified agricultural base. “I’m really proud to be involved in the Louisiana rice industry,” Owen said. 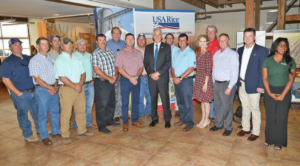 Curley said a 42,000-pound donation last year by Falcon Rice Mill of Crowley was the largest contribution of rice to Second Harvest. Falcon agreed to a match for every 5-pound bag of rice purchased by consumers in September 2018, and Robbie Trahan of Falcon said he will continue the donation this year. Curley said September also is Hunger Action Month.

Farmer Alan Lawson of Crowley read a proclamation by Gov. John Bel Edwards recognizing September as National Rice Month and crediting farmers and mills for making the industry an important part of the state’s agricultural economy.

“This state recognizes the importance of the rice industry,” Chaney said.

Congressman Ralph Abraham of Alto said at the Crowley event that the U.S. relationship with Iraq has resulted in the sales of 300,000 metric tons of rice, and most of it was grown in Louisiana.

Coincidentally, a ship is being loaded at the Port of Lake Charles with milled Louisiana rice purchased by Iraq. About half of the rice grown in the U.S. is exported.