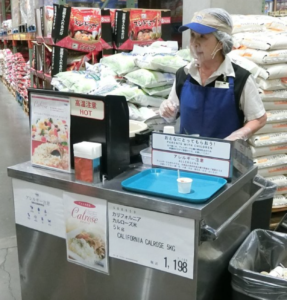 The successful testing brings the product one step closer to being sold alongside other popular American products at Costco and other retail stores throughout Japan, according to a news release.

The goal of the Costco tastings was to determine how responsive Japanese customers would be to the American-grown rice.

The 5-kilogram bag of LaGrande Family Calrose rice is the first rice product grown, milled and packaged in the United States for direct retail sale in Japan. The milling facility at Sun Valley Rice meets Japan’s retail specifications, allowing them to bypass a second processor in Japan and pass on the savings to Costco consumers.

“We understand the role that small, local family farms play in feeding the world — since we come from one,” says Ken LaGrande, Sun Valley president and CEO. “The feedback indicates that consumers and restaurant owners are impressed by the quality, flavor and texture of our rice.

“We are looking to see the market grow and expand into other retail markets as Calrose rice gains more popularity with Japanese consumers.”