Heading into the second crop, be on the lookout for rice planthoppers 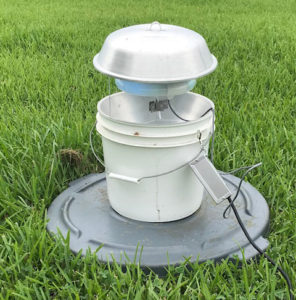 After the discovery of rice delphacid in an El Campo, Texas, greenhouse last winter and a possible sighting recently in Victoria County, a Texas A&M AgriLife Research entomologist has cautioned growers and consultants to be on the lookout for the pest.

“My gut feeling is that they’re here to stay,” said Dr. Mo Way, who’s based at the Texas A&M AgriLife Research Center in Beaumont. “I think they are at real low populations in the main crop, and then they build up on the second crop and they have plenty of host plants. I’d be surprised if we didn’t find any on the second crop.”

To help monitor for the pest – also known as rice planthoppers – Way has installed three black-light traps in rice fields. Insects, attracted to the light, fall down a funnel into a bucket for collection and subsequent sorting and identification.

During the 2019-20 winter, a greenhouse near El Campo reported a severe infestation of rice planthoppers. Way recommended the facility be treated with an insecticide, which controlled the pest.

Earlier this season, Texas rice consultant Weldon Nansen sent Way a photo taken with an iPhone of what appeared to be a rice planthopper from a Victoria County rice field. Way said he assumed Nansen didn’t wait and recommended the field be treated.

A couple of other consultants sent him photos that were blackfaced leafhoppers, a common inhabitant of rice fields.

“So there’s been nothing for sure so far,” Way said. “But they’re cutting the main crop and now they’re starting to grow the second crop, which is where we’ve found them before.”

Native to Central and South America, the rice planthopper was found in 2015 in several second-crop rice fields west of Houston where it caused significant yield reduction.

What caused the pest to appear in 2015 remains unknown. Way established sentinel plots and sampled test fields weekly in 2016 and 2017 without finding a single planthopper.

During 2018 and 2019, the insect was found in scattered second-crop fields west of Houston, but the consultants treated the fields with insecticides before the pest caused significant damage. The planthopper has not been found in any rice fields east of Houston so far. 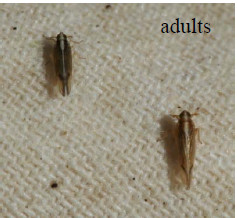 Rice delphacid are about 1/4 inch long and are brown with a yellow stripe down their back.

The 1/4-inch-long rice delphacid damages rice by sucking out plant juice. Widespread damage is visible from a combine cab as crop bronzing known as hopper burn.

But probably more concerning is the insect is able to transmit a severe viral disease of rice, “hoja blanca.”

In the past, Way sent planthopper samples to Dr. Ismael Badillo-Vargas at Texas A&M Weslaco for disease screening. None carried the hoja blanca virus.

Jaclyn Martin, a doctoral student in entomology at College Station, has taken over that role. She will be screening samples from the El Campo greenhouse for the disease as well as looking at their genetic make-up to determine other delphacid populations in the world to which they are closely related.

Way traveled to the International Center for Tropical Agriculture (CIAT) in Cali, Colombia, in December 2017 to learn more about the planthopper in its native environment.

In areas of Colombia where the disease is endemic, developing resistant varieties is the only economic solution, he said.
Way is in the process of sending samples of seven U.S. inbred rice varieties to entomologist/rice breeder Dr. Maribel Cruz at CIAT to screen for possible hoja blanca and delphacid feeding tolerance.

The rice planthopper, scientifically known as Tagosodes orizicolus, was reported in rice-growing areas of the Southeast United States from 1957-1959 and from 1962-64. During that time, hoja blanca was found in Florida, Louisiana and Mississippi. But because the vector never established, the disease has not been reported since then.

If you suspect a rice delphacid infestation in a Texas rice field, contact Way at 409-239-4265 or moway@aesrg.tamu.edu. In Louisiana, contact LSU AgCenter’s Blake Wilson at 225-642-0224 or BWilson@agcenter.lsu.edu.