How times have changed!

Yields, pest control and cultivation have advanced during the past five decades as Texas growers strive to remain profitable.

Rice production in Texas has changed greatly over the past 50 years. Table 1 summarizes a few of the major differences comparing U.S. farm and rice production today with production 50 years ago in 1966.

In the late 1960s, the average farmer was 51 years old, the size of a farm was 1,600 acre and the cost of agricultural land was $105 per acre. The large majority of rice acreage was planted on contours with the distance between levees smaller the greater the slope of the land.

Contour paddy levees occupy on average about 18 percent of land. Because levees yield much less than the flooded paddies, the yield of land with contour levees was greatly reduced. In 1966, nitrogen was applied as a single application almost entirely by ground rig.

Available insecticides were mostly organophosphates, chlorinated hydrocarbons and carbamates, and were typically applied at a rate of 1 to 3 pounds active ingredient per acre.

Texas rice farmers produced an average of about 4,300 pounds of grain per acre, while grain milling yield in the low to mid 50-percent range was considered quite good. All of the commercial rice varieties grown in Texas were taller than today and averaged about 47 inches in height. 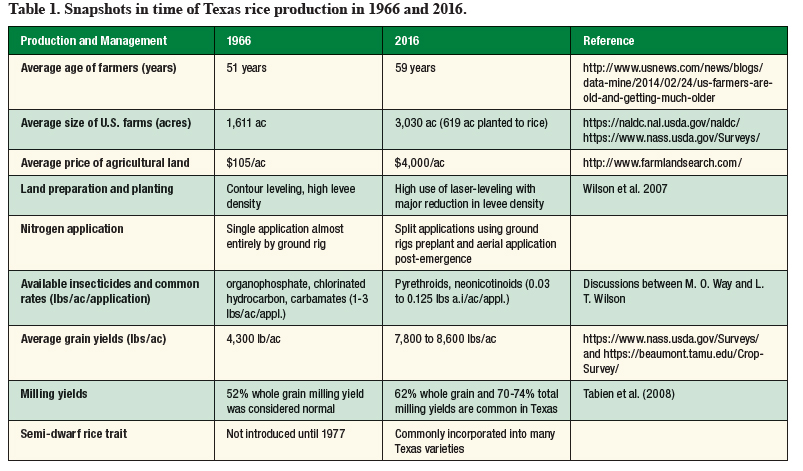 During the 50 years that have elapsed since 1966, the average age of a U.S. rice farmer has increased by eight years to 59 years old. Farms now average 3,000 acres in size with a bit more than 600 acres planted to rice.

The average price for agricultural land has risen by 3,800 percent to about $4,000 per acre.

Depending on the irrigation district, more than half of rice acreage in Texas receives one form or another of limited tillage production.

Adoption of more advanced laser leveling has allowed paddy density to be greatly reduced and in many cases with as low as 2-3 percent of the rice land being levees. Texas rice farmers now use about 40 percent less water than was used 50 years ago on a per-acre basis.

The current rates are as little as 1/100th the rates used 50 years ago.

At least half of insecticide use is as seed treatments, which in many cases helps reduce the likelihood of pesticide drift and exposure to non-target arthropods. A relatively large number of typically highly effective herbicides and fungicides are also now available.

However, resistance to herbicides and fungicides increasingly challenges production. Pesticide resistance in Texas rice systems was not a noticeable problem in 1966.

About 62 percent of rice acreage was planted to hybrids in 2016, which poses challenges in terms of grain quality but presents opportunities for those growers to achieve higher yield potential.

Dr. Lloyd T. (Ted) Wilson is a professor, center director and Jack B. Wendt Endowed Chair in rice research with Texas A&M AgriLife Research. He can be reached at lt-wilson@aesrg.tamu.edu.