After graduating from Mississippi State University (MSU), Chico and Pete Williams returned to the family farming operation near Hollandale, Miss. Their grandfather, Leo Williams established the farm in the early 1940s and was later joined by his son, Leo Williams, Jr. They were primarily cotton, cattle and soybean farmers at the time.

In the 1970s when the rice allotment opened up, the father-and-son team realized their buckshot land was a good fit for rice. Today, Chico and Pete are third-generation producers at Lakeland Planting Co., growing rice, soybeans and corn. Although the brothers are not growing as much rice as they did in the past, they still feel it’s important to keep rice in their crop mix. Pete generally oversees the day-to-day rice production work, and Chico handles the management and marketing aspects of the operation. The brothers split the responsibilities related to soybeans and corn.

“Our rice is all marketed through Producers Rice Mill pool,” Chico says. “It takes a lot of the pressure off to let them market the crop because they can adjust the basis as needed to get to the right price.”

2014 Production Strategies
This year, Chico and Pete are planting CL152 and one field of Rex to fill out the borders around MSU’s variety trial.

“We like CL152 because of its standability,” Pete says. “It doesn’t lodge. At planting, we will apply Sharpen, Command and Roundup with a RoGator, which has wide booms, then come back with an aerial application on the Clearfield with one shot of Newpath followed by Clearpath at flooding. We also have GPS technology on our hippers and planters to eliminate having to use row markers.”

As for their rice fertility program, Chico and Pete anticipate applying ammonium sulfate and DAP before flush and 200 pounds of urea at flooding. At mid-season, they will come back with another 200 pounds. 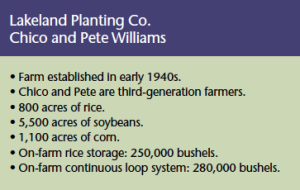 Pete says that disease has not been a big problem for them because of the varieties that they plant. They also don’t skimp on any inputs. A preventative fungicide always goes out after mid-season

“We’ve also bought five flow meters and plan to install them this summer to facilitate our water management,” Chico says. “And, from a ‘boots in the field’ standpoint, Bill Killen, our rice consultant, makes a big contribution to our operation. Bill has a lot of experience and, after walking the fields, he tells it like it is. We also get consulting advice from Brian ‘Bozo’ Ward, who checks our soybeans and corn. He has really helped us get our yields up.”

Investments In Efficiency
Like many other farmers in the Mississippi Delta, Chico and Pete purchase polypipe manufactured by Delta Plastics, which is located in Little Rock, to use in watering their soybeans and corn. Not only is Delta Plastics interested in producing a superior product to offer their customers, it also is interested in preserving the environment. Once farmers have finished up the growing season, Delta Plastics provides free, on-farm pickup of used polypipe in the fall and takes it to a recycling plant. The company notes that all tubing must be rolled and tied, and baled tubing also is acceptable.

Another area in which Chico and Pete have put time, effort and capital is in increasing their on-farm grain storage. One of the advantages of having this capability is to eliminate being at the mercy of long lines at the grain elevator during the heat of harvest. Today, Lakeland Planting Co. has an on-farm rice storage and drying capacity of 250,000 bushels (three sets of bins) and a continuous loop system storage capacity of 280,000 bushels for corn and soybeans.

“Although we do have a continuous loop system, we use the augers and circles for our rice because the big bins in the loop system don’t have stir-alls and heaters to dry the rice,” Chico explains. Although rice planting for the 2014 season is running behind the optimal April planting dates, Chico and Pete are hoping that their crop will begin to grow off at a fast pace now that the weather is consistently staying warm.

“We normally begin harvesting in the middle of August, but we probably will be a little late this year,” Pete says. “Hopefully, we will be able to start harvesting at the end of August and still get the rice out in September. At this point, we have to wait to see what the weather does.”