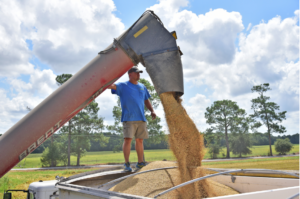 Farmer Michael Fruge, of Eunice, loads rice into a tractor-trailer to be hauled to a nearby grain elevator in August 2019 — photo by Bruce Schultz/LSU AgCenter

Planting is underway or about to start for most crops in Louisiana, and farmers are watching the markets closely as the world economy reels from the fallout created by the novel coronavirus.

Louisiana State University AgCenter economist Michael Deliberto said commodities are looking better this week, and the stock market has improved. But uncertainty from the pandemic is a dominant factor in the economy.

“This uncertainty has translated into downward pressure on commodity prices. As uncertainty begins to resolve in the coming weeks and months, the outlook on usage and demand will have more clarity,” he said.

Markets will begin to focus on production and growing season issues as well as on how demand might evolve.

“As uncertainty begins to resolve in the coming weeks and months, the outlook on usage and demand will have more clarity. As such, markets will begin to focus on production and growing season issues as well as how demand might evolve.”

Rice has made a big jump in price, with May contracts on March 23 for $13.35 per hundredweight, or $21.63 a barrel, or about $6 a bushel. Not much rice may be left on-farm for old crop prices to continue to increase.

“This is a function of lower supply really driving the price up,” Deliberto said.

Increased rice exports have boosted prices, and demand is good for rough and milled rice. Milling continues to satisfy commitments to Latin America and Mexico buyers.

“Another factor for the jump may be that outside funds are looking into the commodities such as rice,” he said.

Cotton not faring as well

Cotton has not fared well in the past few days, with prices falling to the lowest levels since 2009. May cotton was staying above 50 cents a pound on March 23.

Soybean prices remain low, below $9 a bushel, a price that makes the commodity attractive to buyers.

“U.S. soybeans are competitively priced, and traders are on alert for any signs of Chinese demand for U.S. supplies. Slowing U.S. exports are hurting prices among other factors,” he said.

Corn prices in the mid-$3-per-bushel range have benefitted recently from increased export demand, but it’s not known if that is a trend. Also unknown is the effect of the sharp drop in crude oil prices on the ethanol industry outlook, he said.

There is some expectation that the Chinese will be buying more commodities.

“That adds to the positive tone today, with stock index futures erasing steep overnight losses this morning ahead of the opening on Wall Street after the Federal Reserve moved to inject a large, unprecedented expansion in programs to provide more liquidity to the markets,” Deliberto said on March 23.

There is talk that the economic stimulus bill in the Senate may include funds for another round of Market Facilitation Payments.

Last week’s trading was based more on fear than reason, Deliberto said.

“It’s often said markets need a calming influence before some semblance of normalcy can return,” he said.

Investors are turning to the U.S. dollar.

“It quickly displaced gold, which has lost nearly 15% in the past two weeks,” Deliberto said.

Print & E-mail
louisiana lsu agcenter planting rice planting 2020-03-25
Vicky
Previous: Use the DD50 rice management program to stay ahead in 2020
Next: Wet weather has Arkansas growers waiting to get into their fields