Wet weather has Arkansas growers waiting to get into their fields 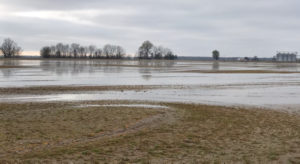 Growers in Arkansas’ rice belt are enduring a repeat of the 2019 spring — unseasonably wet weather that has mostly kept them out of their fields.

“We had about five days in a row a few weeks ago that were dry enough to work, and we got a lot done, but no seed yet,” said Jennifer James, who farms with her family near Newport, Arkansas. “It was a tad early for us here in the north, so we waited, and I’m so glad we did ,because it has been too cold for expensive seed to sit in the ground. It does need to stop raining, though, as the wet forecast is so depressing — sort of déjà vu from last year.”

Jeremy Jones, who farms with his family near Humnoke, Arkansas, said they are in a similar situation.

“We had one dry week at the beginning of this month where we were able to do some field prep, but nothing has been planted yet,” he said. “It looks like we may get a few days of rain in the next week, in which case it will still be wet, but we will go ahead and water seed the fields that we were able to prep.

“When it does dry up enough to get back in the fields, there will be a lot of land that was rutted up from last year’s late harvest and will need to be prepped before planting. Until then, a lot of people have been working on equipment in the shop and shipping the rest of last season’s rice.”

In southeast Arkansas, producers like Jim Whitaker haven’t had time to do any field prep.

“If it was drier, we could start planting now,” he said. “As soon as it dries up, we will go straight to planting. We would like to do some work in the fields before we plant, but as it gets later in the year, we will do more of what we have to do and less of what we want to do.”

Whitaker said he believed that if no more major hurdles occur, Arkansas could have a large rice crop.

“If we have a stretch of good weather and everything else stays positive, I feel we could have a big rice acreage this year. Everyone is geared up to get seed in the ground fast and that could work in our favor. Right now, all eyes are on the coronavirus and looking to see what happens next in each state.”

This article originally appeared in USA Rice’s “The Rice Daily.”