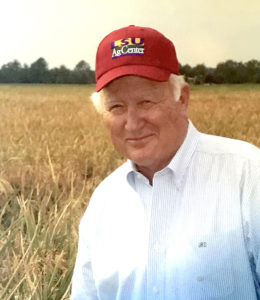 The seventh annual Louisiana Agriculture Hall of Distinction will honor four new inductees who have made major contributions to forestry, rice, cotton and sugarcane. The event, which had been scheduled for March 26 at L’Auberge Casino Hotel in Baton Rouge, has been postponed due to the novel coronavirus.

Barnett, a Pineville native, has spent nearly 50 years advancing the reforestation of Southern pine species. He is being honored for his major contributions, research and advancements with seeds and seedlings. A former captain in the U.S. Coast Guard Reserve, he has written more than 350 publications on seedling survivability and forest nursery management. He is a 50-year member of the Society of American Foresters and a distinguished alumnus of the Louisiana State University School of Renewable Natural Resources.

Denison is a third-generation farmer from Iowa, Louisiana. He is being recognized for his integral role in the advancements in production and profitability of Louisiana’s rice industry. Denison has earned a number of honors and significant positions over the years, including chairman of the Louisiana Rice Producers Group, Rice Farming magazine Rice Farmer of the Year and serving as a founding member of the Louisiana Rice Research Board.

A native of the Bayou Teche area, Viator was reared on his family’s sugarcane farm and has become an active contributor to the agriculture community. He founded one of the state’s most successful crop consulting companies and works closely with the American Sugarcane League, the LSU AgCenter and the U.S. Department of Agriculture.

Event tickets are $45 and are available for purchase at www.louisianaagriculturehallofdistinction.com. The Hall of Distinction induction ceremony is presented by Louisiana Radio Network in cooperation with the LSU AgCenter, the Louisiana Department of Agriculture and Forestry, and the Louisiana Farm Bureau Federation.