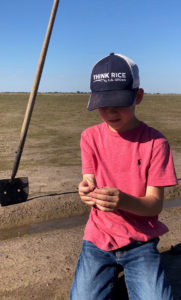 While things have slowed down across the country because of COVID-19, the past week and a half were busy for rice farmers in southwest Louisiana. Planting is underway and moving quickly, according to Dr. Dustin Harrell, rice specialist with the LSU AgCenter Rice Research Station in Crowley.

“A lot of rice has been water seeded, and with this past weekend’s warmer weather, that rice has really taken off,” he said. “With this warmer weather, we’re getting to take advantage of the warmer soils. While this year’s early growth isn’t necessarily surpassing the better than average mark, it is definitely better than last year’s.”

After talking with farmers across the region, Harrell estimates that south Louisiana could be more than 75% planted in the next week or two, if the weather holds.

Taking advantage of the weather opportunity, several growers had indicated they have close to two-thirds of their planting intentions already in the ground. There are also reports that some row rice planting is getting underway on the more traditional rice ground in northeast Louisiana.

Planting is never seamless, however, as sporadic showers have made their way across the region, with some leaving behind an inch or two of rain.

“The field conditions were becoming more ideal, and we did get some rice drilled earlier this week. But that stopped when the rain started,” said Paul Johnson from his fields near Thornwell. “We woke up Tuesday with 2 inches in the rain gauge, but I’m not going to complain. We’re ahead of where we were last year at this time with rice moving out of the ground, so that’s a good thing!”

Something else noticeably different this planting season is the younger generation is out of school and in the fields with their mothers and fathers.

“Yesterday I passed a tractor and realized the driver couldn’t have been more than a teenager,” said Harrell.

With all the school closures, farmers suddenly have an extra hand or two available. Those kids aren’t getting to sit around the house during this break — they’re going to learn the planting part of the spring season, not just join the harvesting piece during their late summer vacation.

This article originally appeared in the USA Rice’s “The Daily.”