• By Bobby Golden and Dan Roach •

Producing rice in a “rowed-up” manner as other row crops such as corn, soybean and cotton, was a foreign concept just a couple of years ago. Row rice or furrow-irrigated rice was initially investigated by Mississippi State University researchers as an alternative to conventional flooded rice production in the 1980s.

This was long before the introduction of the “new” rice herbicides Facet, Command, Newpath and Clearpath, and issues with weed control ultimately led to the abandonment of the concept. Today, there is tremendous interest in growing furrow-irrigated rice compared to growing rice in a typical flooded environment.

In 2016, the MSU Irrigation team, due to producer demand, started investigating furrow-irrigated rice. Graduate student Lee Atwill has completed two years of small-plot research at the Delta Research and Extension center in Stoneville. A summary of his research is presented below.

Water levels in each paddy were monitored using a Pani pipe and irrigations were triggered at each respective threshold. While individual herbicide treatments preformed well in Atwill’s trial, additional scouting may be required for broadleaf weed with implementing row rice.

Nitrogen management was also investigated using the different rice cultivars and irrigation treatments. The results suggest that when nitrogen is applied using a three-way spilt of 50/25/25, highest yields were achieved. The other treatments — 100 percent pre flood, two thirds/one third split and 25/25/25/25 — all resulted in the similar yield. All fertilizer (NBPT treated) applications were applied to wet soils except for the initial pre flood treatments.

It should be noted that the optimized AWD allowed the water on the top side of the plots to receded to 4 inches below the soil surface while maintaining flood water on the bottom side of the plots. The other row-rice irrigation treatments differ in that the entire plot was allowed to dry equally from top to bottom. These small-plot trial “worst case” scenarios help explain the yield variation we have seen in the on-farm trial work.

The two year furrow-irrigated rice small plot data suggest that a continuous flood irrigation and an optimized AWD (allowing the flood to recede to 4 inches below the soil surface while maintaining flood water on the bottom side of the plots) irrigation yield substantially better than allowing the soil to become dry.

When you think about what actually happens on the farm, each field of furrow-irrigated rice is actually three sub fields. As demonstrated by the example, the top one third is the driest, the middle is similar to the optimized AWD treatments (soupy wet but never dry) and the bottom one third resembles a continuous irrigated field. 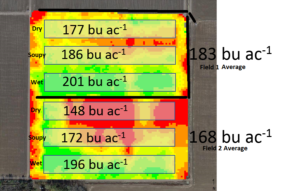 This yield map is from a furrow-irrigated field divided by a levee in the center of the field, making essentially two individual fields. Water was held by the levee as well as the flash board riser.

Dr. Bobby Golden is an agronomist at the MSU Delta Research and Extension Center in Stoneville. He may be reached at BGolden@drec.msstate.edu. Dan Roach is an Extension research associate at the DREC. The article originally appeared on the Mississippi Crop Situation website.