New kid on the block

Unique to the Mid-South, Missouri rice growers own and manage their research farm.

Editor’s note: Rice Farming magazine is celebrating 50 years of publishing in 2017. We would be remiss if we didn’t include an article about Missouri rice production. View histories of the other rice-producing states in our February 2017 issue online at www.ricefarming.com. 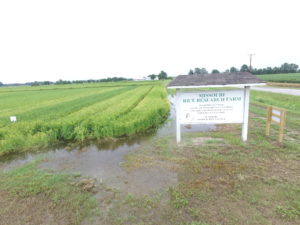 Almost immediately, the council started discussing the possibility of a research farm dedicated to producer-desired and producer-directed research and marketing. The Missouri Rice Research Farm was established in the mid-1980s with the acquisition of 30 acres plus 10 leased acres.

New council members included B.J. Campbell, Richard Burnett, Andy Clark and Gary Murphy. Subsequently, the Rice Research Farm acquired an additional 75 acres, and the entire complex was land graded and established for flood irrigation. A machine complex and office were installed, as were the access roads, communications and field machinery.

Dr. Paul Tracy, a University Missouri agronomist, was the first farm manager. Dr. Donn Beighley was the rice breeder until he retired in 2016, with Dr. Christian DeGuzman replacing him in developing new varieties.

In 1997, the council became one of the founding members of the U.S. Rice Producers Association.

The uniqueness of the Missouri Rice Research Farm is that it is completely owned and operated by the council. It is our understanding that no other major research facility in the central United States is farmer owned and managed.

The council supervises rice merchandising and branding. It joined with Opaa Food Management, a school lunch service provider, enabling Missouri rice as a key component of school lunch and breakfast programs across Missouri and five other states. The council also works with the Missouri Legislature to support September as rice month.

In addition, the council supports the growing of rice at the St. Louis Science Center, which has more than 1 million visitors annually, and other marketing programs across the state. Council members also are active in supporting trade missions to Cuba and other markets around the world.

Dr. Michael T. Aide is chairman of the Department of Agriculture, Southeast Missouri State University, Cape Girardeau, Missouri. He may be reached at mtaide@semo.edu.