A host of challenges

The 2017 rice season was anything but normal in Louisiana. 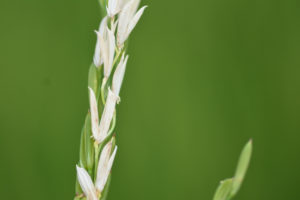 Before the beginning of each production season, rice farmers and consultants can feel the excitement and electricity in the air. They are eager to begin the year with the possibility of achieving that elusive high-quality and record-yielding rice crop that will turn things around.

They hope for a year that will go down in the record books, to be remembered for many years. They have hope that maybe this will be that year. Well, as it turns out, 2017 was not that type of year in Louisiana. Excessive rainfall, high winds, Tropical Storm Cindy, Hurricane Harvey and rampant sheath blight made sure of that.

The poor growing conditions and flooding from the 2016 season caused much of the certified seed planted in 2017 to have a lower-than-normal germination rate, much of it below 80 percent. This was identified by the Louisiana Department of Agriculture and Forestry (LDAF) Seed Certification Program. Due to low seed availability and the abundance of low germination seed, an emergency ruling by LDAF allowed this seed to be planted in 2017 with adjustments made to seeding rates.

The season in Southwest Louisiana began earlier than normal in 2017. This was due to a mild winter and a warmer-than-normal spring. The first rice was planted on Feb. 14. In South Louisiana, about one-third of the rice crop was planted before March 10, and close to 85 percent of the planting was completed by the last week in March.
The warm and dry weather conditions early were ideal, and it seemed like every grain of rice planted came up regardless of the low germination issue. In many cases, rice stands were thicker than normal.
The Louisiana Rice Survey conducted by Extension agents in each parish indicated that there was approximately 391,071 acres of rice planted in 2017. The most widely planted varieties and hybrids were CL111 (24.8 percent), CL153 (12.7 percent), Cheniere (11 percent), Mermentau (10 percent), CLXL745 (9.8 percent), Jupiter (5.9 percent), XP753 (5.5 percent) and CL151 (4.7 percent). Approximately 61 percent of the crop was planted to a Clearfield variety or hybrid.

Blackbirds feeding on planted rice seed is an annual problem, especially south of Interstate 10. The bird repellent seed treatment AV-1011, which was registered in 2016, was widely used in 2017 south of I-10. As a result, or possibly it was a coincidence, black bird predation seemed to shift much higher north of I-10 on farms near Oberlin, Elton, Mamou and Ville Platte.

The early third of the season in South Louisiana was ideal. Soils were dry enough to allow ground rigs to apply herbicides and pre-flood fertilizer. Rice growth and development was progressing faster than normal and, as early planted rice neared greenring, it seemed as if the potential was there for a better-than-average year. That was until the rains began.

Large, sporadic rainfall events occurred during the last couple days of April and into the first few days of May. Rainfall totals exceeded 20 inches in many places, and flash flooding and backwater flooding ensued. Hail damage also occurred in places causing severe damage.

It was estimated that approximately 4,000 acres were completely lost due to the weather. Many more acres of rice lost yield potential due to the stress associated with flooding, high water, and continuous overcast and poor growing conditions that followed. 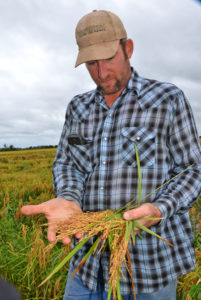 Adam Habetz, who farms near Vinton, Louisiana, near the Texas-Louisiana state line, examines panicles of rice, which had started to sprout after being wet — but not flooded — from Hurricane Harvey’s heavy rainfall — photo by Bruce Schultz, LSU AgCenter

The overcast conditions caused many plant stress symptoms from flooding, herbicide or other stressors to remain longer than normal. The average rainfall for Crowley during the months of April, May and June is 4, 5.2 and 7 inches, respectively.

In 2017 at the Rice Research Station, where we were fortunate to not get any of the excessive rainfall totals, we did receive 5.7, 9.9 and 9.3 inches during April, May and June, respectively. This illustrates that rainfall was well above normal for 2017.

Rice in Northeast Louisiana, where planting generally begins in earnest in early April, also saw frequent and excessive rainfall. While no flooding losses were reported, producers were fighting continuously wet soils, which limited their ability in many cases to use ground rigs to apply herbicides and nitrogen fertilizer on dry ground. In many instances, fertilizer nitrogen was spoon fed using three split applications.

When rice began heading and flowering, mid-day rains affected pollination across Southwest Louisiana. This caused localized regions on the panicle to be sterile, which also reduced grain yield potential in the south.

Tropical Storm Cindy blew through Southwest Louisiana in late June. While Cindy did not drop large rainfall totals, winds from the storm caused problems with pollination and physical damage to the grain that many refer to as grain bruising. Sheath blight pressure was also high late in the season mostly due to the consistent overcast, humid and warm conditions. Fields with thick stands that were heavily fertilized had the greatest disease pressure.

Hurricane Harvey made landfall in Texas in late August, then went back into the Gulf of Mexico and made landfall a second time near the Texas-Louisiana state line. This all occurred during the last third of the rice harvest season.

The slow-moving hurricane dropped massive amounts of water in Texas and the western rice-producing parishes in Louisiana including Cameron, Calcasieu and Jefferson Davis. Several thousand acres of rice was unharvestable due to flooding. Economic losses also occurred due to lodged grain, sprouted grain, and flooding of the ratoon rice crop. Remnants of the storm also had a negative effect on rice in the northeastern part of the state by delaying harvest.

Rice yields in 2017 were highly variable, which was probably due to the inconsistent weather conditions across the rice growing regions in the southern part of the state. All in all, rice yields in Southwest Louisiana were below expectations.

However, the rice harvested in the northern part of the state, which was not delayed due to rainfall, was actually above average. Estimating a statewide yield average may be a bit premature as I am writing this, but I would estimate that Louisiana probably averaged about 6,650 pounds per acre (41 barrels or 148 bushels per acre).

The 2017 season was fraught with tropical storms, hurricanes, flooding, hail, wind and disease. It was anything but normal. Perhaps 2018 will be the bumper crop year we are all looking for. Perhaps not. I would just be happy with normal.

Dr. Dustin Harrell is a Louisiana State University AgCenter agronomist and Extension rice specialist at the H. Rouse Caffey Rice Research Station in Crowley, Louisiana. He may be reached at dharrell@agcenter.lsu.edu.