Outstanding in their field

Every two years, rice researchers from around the United States and even the globe get together for the Rice Technical Working Group.

This year, the two-day event was hosted by Mississippi State University and held recently in Orange Beach, Alabama.

During the awards luncheon, researchers recognize peers who have made outstanding contributions to the industry. Here is a wrap-up of award recipients, which were chosen by the RTWG executive committee.

Dr. Don Groth, Louisiana State University AgCenter plant pathologist and resident coordinator of the H. Rouse Caffey Rice Research Station, was recognized for his decades of research into rice diseases and their control. More recently, he has been part of an effort to develop sheath blight-resistant breeding lines. In June 2019, Groth became the first recipient of an endowed rice research chair that the Louisiana Rice Research Board created with funds from the Colombia Free Trade Agreement.

During her tenure as a University of Arkansas rice breeder, Dr. Karen Moldenhauer has led efforts to develop 33 rice varieties. The most recent releases are CLL16, a high-yielding Clearfield long grain; and the conventional long-grains Jewell and Diamond. Moldenhauer also helped identify a gene responsible for blast resistance, which has since been incorporated into many of the newer rice releases from Mid-South breeding programs.

Dr. Kent McKenzie, director of the California Rice Experiment Station, has spent 45 years developing rice varieties with a focus on grain quality. He has been part of teams that have released 20 varieties. More recently, McKenzie led efforts to develop a non-genetically modified herbicide-tolerant rice. The medium-grain, known as ROXY Rice, is tolerant to oxyfluorfen herbicide. Prior to coming to California, he worked at the LSU AgCenter and was involved with developing Cypress long grain.

Dr. Mo Way attended his first RTWG meeting as a graduate student in 1976. A Texas A&M AgriLife Research entomologist based at the university’s Beaumont Center, Way has conducted research into myriad insecticides and insect control measures over the years. He did much of the early work on rice water weevil seed treatments that are now the norm among rice producers. He also secured numerous Section 18 emergency-use permits for insecticides to control insect outbreaks. In addition to six-legged pests, Way worked on the tennis ball-sized channeled apple snail and blackbird control. 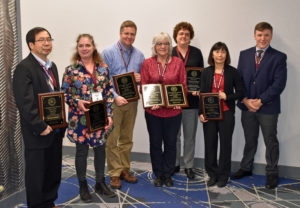 They were recognized for research and technology transfer contributions toward “Genomic Tools for the Development and Deployment of Improved Varieties for the U.S. Rice Industry.” The results have helped university rice programs implement market-assisted breeding.