Secretary of Agriculture Tom Vilsack recently announced approved grants from the first round of proposals to the new Regional Conservation Partnership Program (RCPP). The USA Rice Federation, Ducks Unlimited, Inc. (DU) and more than 40 collaborating partners are pleased that the “Rice Stewardship Partnership – Sustaining the Future of Rice” project was selected for support.

This project will help rice producers conserve natural resources such as water, soil and waterfowl habitat, while having longterm positive impacts on their bottom line. 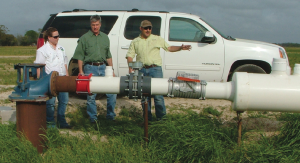 The RCPP application process was very competitive; less than half of all applications were awarded funding, and no proposal was fully funded. However, the USA Rice and DU national request was deemed to have significant merit, and the Natural Resources Conservation Service (NRCS) – the agency responsible for administering RCPP – awarded the partnership a grant of $10 million, which is one of the largest awards given under the program.

A 2014 study conducted by DU scientists for The Rice Foundation demonstrated that rice agriculture provides 35 percent of the food resources available to migrating and wintering dabbling ducks in the regions where rice is grown in the United States.

“U.S. rice farms are valuable, not just for the nutritious commodity they produce and their positive impact on the economy, but also as important contributors to the entire ecosystem, and today’s announcement from NRCS and USDA recognizes that fact,” said USA Rice Federation Chairman Dow Brantley, an Arkansas rice farmer. “Wildlife and waterfowl depend on our farms as much as any of us do.”

“RCPP provides an opportunity for locally driven partnerships to work side by side with local Conservation Districts and NRCS to accelerate conservation efforts and achieve measurable progress,” said NRCS State Conservationist for Arkansas Mike Sullivan.

“The USA Rice Federation, Ducks Unlimited and all of our partners commend the USDA for their vision in creating partnership- driven conservation initiatives, and we especially appreciate each of the six state NRCS offices that were instrumental in crafting a competitive proposal,” said Betsy Ward, President & CEO of USA Rice. “This is a giant step forward for conservation in ricelands with many more steps to come.”

“We applaud the many rice farmers who integrate extra conservation measures into their rice production to maintain water quality and provide much needed waterfowl habitat,” said USDA NRCS Chief Jason Weller. “The partnership between DU, USA Rice and USDA offers increased technical and financial assistance to help producers accomplish these goals on their land. The tangible benefits to farmers, the environment and all Americans will be felt for a long time.”