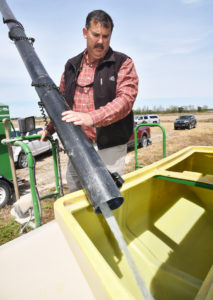 Heavy rainfall has been a challenge as rice farmers strive to get their 2019 crop planted.

Farmers were able to get much of their crop planted during almost three weeks of dry weather, but rainfall during the first week of April has created an obstacle for farmers who needed to complete the rest of their planting.

Todd Fontenot, Louisiana State University AgCenter agent in Evangeline Parish, says farmers there were nearing completion of planting before the rains came. He estimates farmers had finished planting up to 70 percent of their crop.

Drill seeding is the dominant method of planting, but many farmers still use airplanes for planting.

“We had a good bit of early rice water planted,” he says.

Farmers who want to drill seed the rest of their crop will have to wait for fields to drain.

Jeremy Hebert, AgCenter agent in Acadia Parish, says planting there is about 75-80 percent finished. Farmers took advantage of a dry spell after a long stretch of wet weather.

“The last two to three weeks, it’s been full blast. There’s been a lot of rice put in the ground,” he says.

Before the dry weather, many farmers thought they would have to water seed. Now with flooded fields from excess rain, some farmers may choose to water seed the rest of their crop.

“The longer they wait, yields will start to reduce,” he says.

Hebert expects rice acreage in Acadia Parish to remain about the same as last year, about 80,000 acres.

Evangeline Parish farmer Richard Fontenot planted his last field by April 3 and says this is the earliest he’s ever finished.

“In the last two weeks, they really put a lot in the ground,” he says. 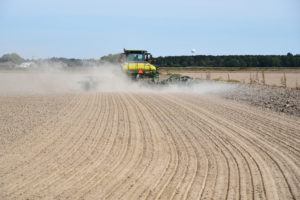 A seed drill leaves a pattern in the soil where rice seed has been planted by Lawrence Lawson near Crowley, Louisiana

Rain on April 4 came at a good time, although it was excessive with some areas reporting as much as 5 inches.

“It’s a little more than they needed to flush the fields. Hopefully, we’ll be able to get the water off soon,” Meaux says.

Keith Fontenot, of the AgCenter Rice Verification Program, says he inspected a field Monday morning that had already drained and had received 7 inches of rain.

“It’s too early to know if young rice will be damaged by the flooding,” he says

AgCenter rice specialist Dustin Harrell says the heavy, continuous rains in late February and early March had farmers concerned that fields would be too wet for drill seeding.

“It looked like it was never going to dry out,” he says.

But after March 17, the weather cooperated and gave farmers a 2 1/2-week window for planting, he says.

“So far, we’ve been lucky, and there’s a lot of optimism for a good crop,” Harrell says.