Arkansas rice production bounces back in 2018 from 2017 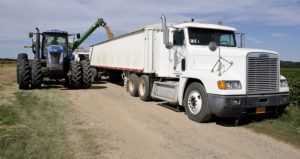 Rice is harvested in Prairie County near Hazen, Arkansas — photo by Fred Miller, University of Arkansas Division of Agriculture

After a bruising 2017, in which substantial spring flooding cost growers in the state an estimated $175 million in lost production and damaged acreage, rice growers saw higher production in 2018 than in any of the three previous years, according to an April 4 report from the U.S. Department of Agriculture.

The report, published by the USDA’s National Agricultural Statistics Service, said rice growers saw clear improvements in harvested acres, yield and production throughout the state. Most of the largest increases in yield, percentage-wise, were seen in eastern Arkansas counties that suffered flooding losses most acutely in 2017.

Phillips County, which suffered between $400,000 and $1 million in crop loss in 2017, saw its rice production more than double from 1 million hundredweight to about 2.13 million cwt. Increases of similar proportions were reported in Lawrence, St. Francis, Ashley and Desha counties.

Jarrod Hardke, Extension rice agronomist for the University of Arkansas System Division of Agriculture, says that while the higher production numbers were a welcome sight, the higher rice acreage in 2018 wasn’t necessarily a surprise, as it followed the natural cycle of shifting acreage, crop rotation and prospective planting in response to relative commodity prices.

Looking forward, Hardke says with the window for much of the state’s planned early planted rice closing for 2019, shifts in acreage are an open question.

“Until a week ago, I’d maintained my expectation that we’ll remain close to flat, at 1.4 million acres of rice,” Hardke says. “But we’ve seen what’s happened with this spring. After a week of dry weather, we saw rains again over the weekend, with more pointed our way.

“1.4 million acres is still the target, but if this pattern doesn’t give, we’ll possibly head down toward 1.2 million acres,” he says. “At this point, we’re staring at a downward trend, but we have a while to go yet before we start losing rice acres.”