For the first time in four years, water is flowing from lakes near Austin, Texas, to rice producers west of Houston. 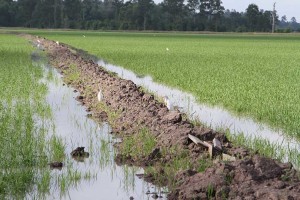 Water from the Highland Lakes is once again flowing down the Colorado River to the Texas Coastal Bend, bringing hope to rice producers, many of whom have struggled the past four years without surface supplies.

For the first time since May 2010, the Highland Lakes in Austin are full. That’s good news for rice producers in Wharton, Matagorda and Colorado counties who can now pump water from the lakes through the Colorado River to irrigate their fields.

“We started pumping water out of the canal around the 20th of March,” says Paul Sliva, a Matagorda County rice farmer.

“There was quite a bit of water delivered for those first couple of weeks.”That water, combined with several inches of rain, led to wet fields for Sliva, which can be good for rice, provided they aren’t too wet.

“Finally I’m starting to dry out — we really just need to dry out to help these plants grow. It’s not just the rice. The milo and corn are all saturated,” he says.

If the weather remains warm and sunny, growers in the area should be off to a good start, says Dick Ottis, president of Rice Belt Warehouse Inc. in El Campo. Last year, late spring and early summer were marked by cool, cloudy weather.

As a result, rice plants struggled and first crop yields were reduced by an esti-mated 20 percent.Rice Belt Warehouse sells both conventional and organic rice seed. Based on sales of conventional varieties, Ottis says he’s optimistic about this season.

“On the conventional side, we’re up at least 20 percent on what I think the acreage will be in this area,” he says. “Today (May 3) is beautiful, with blue sky and 58 degrees, which is a little cool. But we’ll get to 80 degrees. If we can keep doing this, we’ll have some good yields.”

Four years without water took a toll on farmers and supporting industries, causing several businesses to close or consolidate.Acreage plummeted, with producers only planting 135,000 acres throughout South Texas in 2014, according to the U.S. Department of Agriculture. This season, the USDA forecasts they’ll plant 189,000 acres statewide.

Texas rice production is split be-tween regions on the east and west sides of Houston, although the bulk of the crop historically has been grown west of Houston.Water is welcomedFarmers in Colorado County also welcomed the water.

Rice producer Tom Kelley says river water is less expensive than well water, but that doesn’t mean farmers will rely solely on it.

Farmers in Colorado County have spent thousands of dollars to drill wells and will likely continue to use them to supplement river water.According to the Lower Colorado River Authority, which manages water in lakes Travis and Buchanan, the water bodies together were 90 percent full on March 1.

Under LCRA’s new water management plan, those conditions mean up to 202,000 acre-feet of interruptible stored water is avail-able for diversion for downstream agriculture. Interruptible means just that — during a dry year, the authority can reduce or even cut off deliveries. In return, users are charged lower rates.

The plan, approved by the Texas Commission on Environmental Quality in 2015, sets March 1 and July 1 as dates for deter-mining the amount of water interruptible customers receive for their first and second crops.

Following heavy rains and flooding in mid-April, the lakes rose to 100 percent full, which prompted LCRA to open the gates on Mansfield Dam for the first time in years.That bodes well for farmers who look to a July 1 determination from LCRA about whether water will be allocated for a second, or ratoon, rice crop.

“Thankfully, with as much water as we’ve had, we’re going to get a second crop water that we need,” Sliva says. “We’ll all get second crop water because the lakes are full, and they aren’t going anywhere anytime soon.”

The Texas Farm Bureau contributed information for this article.