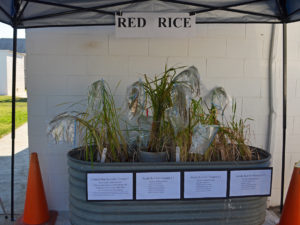 University of California Cooperative Extension showed off the five different biotypes of weedy rice at the annual California Rice Field Day in Biggs in August 2016. The heads were bagged to prevent seed escapes.

A weedy rice infestation exploded in California from a handful of confirmed fields in prior years to covering more than 10,000 acres in 2016, worrying some farmers that it could jeopardize the state’s reputation for quality.

“I’m very concerned about it,” says Don Bransford, a Colusa County rice producer. “We’ve had it under control in California for years. That’s why we have high-quality premium rice, and this could just degrade the quality of rice we sell.”

Kent McKenzie, director of the Rice Experiment Station in Biggs, updated attendees on state seed regulations and reiterated the need to plant only certified seed each season.

All of the varieties from the RES are plant variety protected under the U.S. Department of Agriculture. As such, owners of PVP varieties can manage the use of them. In this case, the Rice Experiment Station requires only certified seed from its PVP varieties be planted.

In addition, all seed handlers must be registered with the California Department of Food and Agriculture.

“Why? Because CDFA is going to help us crack down on this,” McKenzie says. “If you sell non-certified RES varieties, you’re in violation of state seed law. You risk contaminating your fields and customers’ seed fields and you’re violating state laws.”

To help protect the station’s seed, McKenzie says each lot is first tested using a dilute solution of potassium hydroxide. The liquid will turn red if it encounters weedy rice seed. 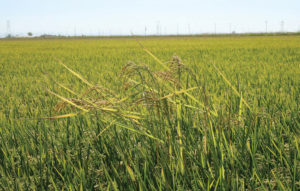 Not all of the five cultivars of weedy rice are taller than commercial varieties. At least one actually is shorter—photo by Timothy Blank, California Crop Improvement Association

In 2006, farm advisers identified four fields infested with weedy rice in two counties. Between 2008 and 2015, several suspect samples were submitted to the RES for testing.

“This is where it gets a little scary,” Brim-DeForest says. “It’s a lot worse than we thought.”

The infested fields comprise about 2 percent of the state’s overall acreage, but she points out those are fields experts know about. Many other fields could possibly be infested but haven’t yet been identified. The infestations also have been found in all of the state’s rice-producing counties except for Sacramento County.

In a non-scientific electronic poll of the 100 mostly growers and pest control advisers at the Colusa meeting, 29 percent said they suspected weedy rice in at least one of their fields.

What is ‘weedy’ rice?

Despite some popular beliefs, weedy rice is not a cross or hybrid between commercial rice and watergrass. In fact, Brim-DeForest says, the two species are not closely related and cannot hybridize in the field.

Weedy rice is the same species – Oryza sativa – as commercially grown rice, just a wild or feral relative. As a result, the state takes no regulatory actions and does not quarantine infested fields. Weedy rice also may be referred to as red rice or weedy red rice.

But because weedy rice is the same species as commercial rice, any herbicide that kills weedy rice also will kill the commercial crop, Brim-DeForest says. University of California Cooperative Extension farm advisers and university experts have identified at least five different weedy rice biotypes. The source or sources are still being debated, and Brim-DeForest says she hopes that by 2018 genetic testing will shed light on the origin.

What all five biotypes do have in common is they shatter readily in the field, potentially decrease yields and increase milling costs. In the South, where weedy rice is endemic, untreated heavy infestations may reduce yields by up to 60 percent, she says.

Prevention is the best cure

As with most pests, prevention is the best option. Brim-DeForest reiterated the need to plant only certified seed and not save seed from season to season. She also emphasized the need to clean equipment coming onto and leaving your farm. If you do have infested fields, perform cultural practices on the clean fields first, saving the infested ones for last.

After harvest, Brim-DeForest warned against tilling, since that could bury the seed. Although burning has been promoted as a way to decrease seed beds, she says the temperature must be extremely hot to be effective. Whether winter flooding affects weedy rice seed viability is unknown.

In the spring, no-tilling is preferred.

If possible, fallowing or rotating to other crops is recommended. Stale seedbed also may be used to help reduce populations.

During the season, hand rogue weedy rice plants before they go to head. Once they’ve headed, roguing could cause shattering, spreading the seeds. Complete best management practices for weedy rice are available on the UC website, http://rice.ucanr.edu.

The more eyes, the better

Brim-DeForest called on all growers and pest control advisers to keep their eyes peeled for the pest.

“This year, we’d really like to have everybody help,” she says. “The more folks we have out there looking for it, the better it is. If you suspect it, report it.”

If growers or PCAs suspect weedy rice, Brim-DeForest says they should remove the suspect plants and call their local farm adviser, who will take samples for testing.

The results will be returned to the PCA or grower, whose information will be kept confidential.