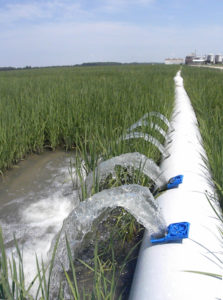 Scott Matthews, a rice producer south of Jonesboro, Ark., experimented with multiple-inlet rice irrigation about 10 years ago, had a couple of self-described disasters and gave up on it. He revisited the irrigation technique—nicknamed MIRI—in 2015, this time with the help of Mike Hamilton, a University of Arkansas Extension/Natural Resources Conservation Service irrigation educator.

Matthews installed it on three fields in 2015 and had such success that he converted all but one rice field over to MIRI in 2016.

“The thing that really sold me on it was Mike made it efficient for me,” Matthews says. “We had a calibrated design prior and we were close, and we tweaked it and it worked. That’s allowing me to expand it across more of my operation.”

Steve Craig, who farms rice near Marked Tree, Ark., also is a MIRI convert, although he made the switch more than a decade ago.

But they also showed Craig the benefits of using poly tubing to flood up all of the paddies within a field at once.

The very same year, Craig installed MIRI on all of his fields and hasn’t looked back.

“There’s just no comparison because you’re putting the water out right where you need it and when you need it,” he says.

On average, producers who have adopted MIRI use about 25 percent less water compared to conventionally irrigated fields, Hamilton says. That doesn’t count other benefits, such as a reduced cold-water effect, and improved fertilizer and herbicide efficiency because all the paddies in a field are being irrigated at the same time. As a result, the producer achieves a shallow flood across more acres.

In a traditional rice field, water is pumped into the top of the field and through gravity feed cascades from paddy to paddy through levee gates until it reaches the bottom paddy. 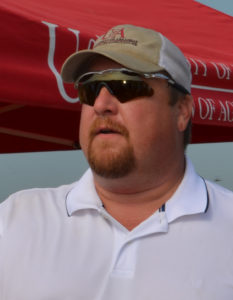 A large head pressure is needed to push the water through the field, and it may take several days to get water to the lowest checks. At the same time, the irrigator is moving levee and spill gates up or down to control water levels within each paddy as it flows downhill.

Take a field with 23 levees, Hamilton says as an example. That amounts to up to 46 gates that must be adjusted each irrigation if producers install them on both sides of a field.

But with MIRI, each paddy in a field is flooded up simultaneously. Once irrigators have adjusted the gates early in the season for the proper water level within each paddy, they can leave them pretty much untouched until draining before harvest.

Irrigators initially raise the gates 1 to 2 inches to catch the free moisture—known as freeboarding—to take advantage of rainfall while being sure not to have them raised higher than the levee can safely hold. But they typically don’t have to worry about bottom levees being blown out by a surge of water from the upper paddies unless a large rainstorm happens, in which case neither system can tolerate it.

Although some may believe MIRI provides an overall labor savings, Hamilton says that isn’t necessarily true. More labor is needed to lay the tubing and adjust the gates early in the season. Once everything is set, labor requirements are minimal until just before harvest, when workers must remove the used tubing from the fields.

Matthews agrees. “Putting it out and picking it up is tough. But what you get is peace of mind, the efficiency, just everything you get between those times is well worth it. Once you get it set up, it’s the easiest irrigation I’ve ever done.”

Putting the math to MIRI Calibrating and setting up a multiple-inlet system is based on well output, which dictates tubing size and number of holes punched, Hamilton says. If growers don’t have a flow meter to measure well output, then can borrow one from county Extension offices if they farm in Arkansas or from NRCS offices in many other regions of the Mid-South.

Growers also need to know their field sizes as well as levee placements so individual paddy sizes can be determined.Knowing the fall of the field also is helpful. 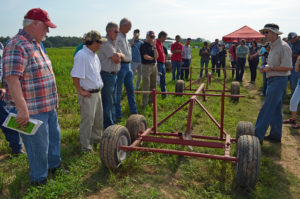 Some growers have built devices that dig a small V trench and lay the poly tubing all in one pass.

All of this is fed into Pipe Planner, a free software program from Delta Plastics. It calculates the diameter of the tubing needed.

“But run the program and see the pressure before you purchase your tubing and put it to use,” Hamilton warns.

Pipe Planner also recommends how many holes to punch per paddy. What works best is to include at least one 2½-inch blue gate for each paddy, he says. With a sliding closure, blue gates allow users to fine-tune water flow.

“You might have different soil types in different paddies and they may require a few more gallons per minute,” Hamilton says of the adjustments afforded the blue gates.

The holes and the gates should be put in the top of the tubing, which reduces the chances of it moving. Many growers also dig a small trench in which to lay the tubing, further preventing it from “walking” away when water is turned on and off.

Some growers have even installed barriers, such as rebar or PVC pipe driven into the ground, to further hold the tubing in place. Hamilton recommends running water and filling the tubing before putting in any type of restraints.

Although weather caused some tough challenges for rice in 2016, Matthews says he was pleased with his yields, all things considered, and attributed it to MIRI.

“I think it helped us maintain that (water) level we want to maintain during that really high use period,” Matthews says. “I think it preserved our nitrogen a little bit better than flood irrigation. And it seems like our rice was more consistent in moisture from top to bottom.”

As he has done in the past, Matthews in 2016 noted observations in each field throughout the season and shot images with his smartphone to document what he saw.

After the season ended, he reviewed the information to determine improvements for this season—“maybe change the size of a few holes,” Matthews said, thinking out loud.

For more information on Pipe Planner and MIRI, contact your county Extension agent or local NRCS office. The University of Arkansas has released the Rice Irrigation app for Android, iPhone and iPad as an easy way for growers to develop a MIRI plan. The app is available for free download from the Apple App Store or Google Play.

In addition, the University of Arkansas and Mississippi State University, in conjunction with Delta Plastics, are making a short educational video on MIRI for release in the coming months. Hamilton also has prepared a four-page MIRI tips sheet available for download at http://bit.ly/2k4N2js.