Researchers get to the root of weedy rice’s aggressiveness 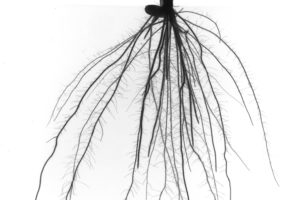 Weedy rice is neither wild rice nor commercial rice, but instead rice gone rogue that has shed some traits important to people.

It also is an incredibly aggressive, potentially detrimental weed that pops up almost everywhere rice is grown, and it can reduce crop yields by more than 80 percent if it invades a field.

Researchers from Washington University in St. Louis and the Donald Danforth Plant Science Center used a new imaging technique to reveal a takeover strategy that has worked for weedy rice over and over again: roots that minimize below-ground contact with other plants.

“Weedy rice may have evolved a go-it-alone ‘cheater’ root growth strategy that could allow it to exploit the nutrient-sharing soil environment of rice fields,” says Kenneth Olsen, biology professor in Arts & Sciences at Washington University and senior author on a paper in the journal, “New Phytologist.”

“We tend to think of competition occurring above ground because that’s the part of the plant we see. But that’s only half the plant,” Olsen say. “It’s the ‘hidden half’ — i.e., the root system — that plays a critical role in some of the most important aspects of plant growth and survival, including water uptake and competition for essential nutrients like nitrogen and phosphorous.”

By some estimates, root growth is actually a more important determinant of competitive success than above-ground growth, Olsen says.

“This appears to be particularly true for agricultural weeds such as weedy rice, which compete against crop varieties in agricultural fields,” he says. 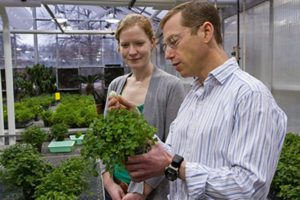 Scientists are only just beginning to get their first realistic glimpses of how root growth and below-ground root interactions affect a plant’s ability to compete for resources. In the past, they couldn’t get a decent look at a root system without digging it up, which inevitably damages it, or by growing plants in very artificial conditions, such as sandwiched between two glass plates.

For this study, researchers compared the roots of two independently evolved types of weedy rice that occur in the same rice fields in the southern United States. Using new imaging techniques, including a semi-automated optical tomography approach developed by Christopher Topp at the Donald Danforth Plant Science Center, the researchers took more than 70 photographs of the root systems of each of 671 different weedy rice plants.

Then they modeled the pictures in 3D to create 360-degree digital maps of their roots.

They also conducted genetic analyses to track the weeds’ separate paths from their domesticated pasts to their persona-non-grata status in the rice fields of today.

“Natural selection says that they (the two types of weedy rice) should respond to this environment by evolving similar traits,” says Marshall Wedger, a doctoral candidate in Olsen’s laboratory and first author on the paper. “They did evolve similar traits in response to similar environmental pressures, but they did so using very different genetic mechanisms.”

The new study shows how two independently evolved weedy rice strains have convergently arrived at a similar pattern of root growth that may play a role in their ability to outcompete cultivated rice for soil nutrients.

“By looking at the genetic basis of weedy rice evolution, we can see whether — at the genetic level — there’s more than one way to evolve a weed,” Olsen says. “What we find, both for above-ground traits and now with this study for below-ground traits, is that the answer is a definitive yes.”