Researchers use buried drip irrigation to winnow out drought-tolerant genetics 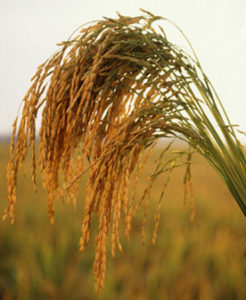 Like people, some plants handle stress better than others.

Now, in a recent issue of Agronomy, a team of Agricultural Research Service (ARS) and university scientists report their identification of U.S. rice varieties with the right “genetic” stuff for coping with reduced water use.

Their efforts dovetail with a trend toward water-saving measures that some growers are implementing in not only Arkansas, which produces half the U.S. rice crop, but also other major rice-growing states, namely Mississippi, Missouri, Louisiana, Texas and California.

Rice is traditionally grown in leveed sections of fields called paddies that can be flooded with water pumped in from rivers, alluvial aquifers, on-farm reservoirs and other sources. Such flooding helps control weeds and ensures the rice crop can attain its maximum yield potential.

However, a number of factors have contributed to growers’ increasing interest in alternatives to flooding, including competition for water from other sectors of society such as municipalities and the effects of global climate change such as erratic rainfall, according to two of the Agronomy journal authors, Jai Rohila and Anna McClung. Both work at the Agricultural REserach Service’s  Dale Bumpers National Rice Research Center in Stuttgart, Arkansas. Their co-authors on the paper are Christopher Henry with the University of Arkansas and Argelia Lorence with Arkansas State University.

“Reducing water use, which is currently about 30 inches per acre over the season for Arkansas-grown rice, is a necessary step toward sustainable production of rice and food security,” said Rohila, an agronomist. “About 80% of the irrigation water for the Arkansas rice crop is pumped from the Mississippi River Valley alluvial aquifer.”

Over the past four decades, the aquifer’s water levels have dropped at the rate of 12 to 18 inches per year, he said. Alternate wetting and drying, furrow irrigation, land leveling, tailwater recovery and multiple-inlet irrigation are some of the strategies growers are investigating or already using to conserve water, in some cases by 20%.

There’s been a genetic hitch, though, that can lead to grain yield reductions under such measures.

“All current rice varieties in the United States were essentially developed for production under continuous flood irrigation management systems,” said McClung, a supervisory geneticist who directs the ARS center. “We conducted this research to determine what are the traits and genetic resources that can be used to develop new rice cultivars that will have high grain quality and yield under reduced irrigation inputs.”

Toward that end, the team designed a series of field experiments in which they subjected 15 different rice cultivars (conventional medium- and long-grain varieties as well as specialty rice) to sub-surface drip irrigation regimens based on one of four soil-moisture scenarios, or “volumetric water contents” (VWCs).

The first scenario was comparable to conventionally flooded field conditions with a VWC of 30%. The fourth mimicked a severe water-deficit scenario (VWC 14%) capable of triggering catastrophic wilting from which the rice crop can’t recover. In between these extremes were two moderate water-deficit scenarios with VWCs of 24% and 20% “This gradient of soil moisture regimes in our study allowed us to assess how well the varieties can respond to varying degrees of water deficit,” Rohila said.

Among the results were:

• Of 10 total traits (e.g., plant height, flowering time/duration and “grainfill”) they examined, six traits accounted for 35% of the variability in the varieties’ physiological responses to water stress, including their ability to produce grain.

• Unexpectedly, varieties with higher leaf canopy temperatures tended to produce the most grain under water-stress conditions.

• Those same varieties also had genetic origins in tropical or subtropical regions of the world, where heat stress conditions are common, another form of physiological stress.

• One top contender that performed well under water-stress conditions is a tropical japonica-type rice from the Philippines known as PI 312777. Other top performers were Francis and Mars from the United States and Zhe 733 from China.

• Among the cultivars tested, 10 have been used to develop populations of offspring displaying different stress-coping traits that can be used with genomic mapping techniques. This, in turn, can help identify the genes that control these traits and potentially use them in rice breeding and improvement programs.

McClung said they aim to provide rice breeders with DNA markers associated with the genes and alleles (alternate copies) for these traits so they can be passed into elite rice varieties more quickly, efficiently and with less cost.

The researchers said this is the first step in adapting rice varieties to production systems that use a minimum amount of irrigation, a pursuit that will become increasingly relevant as the world’s population soars to nearly 10 billion individuals by 2050 amid finite arable land, water and other natural resources.

“We understand our vision is ambitious,” Rohila said. “but the goal is to have both food and natural resource (water) security for society and our future generations.”