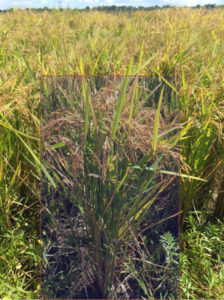 New varieties are the life blood of the Louisiana rice industry. Rice variety development is primarily focused on the enhancement of yield, grain quality, disease and insect resistance and production traits. Nearly 45 percent of all water used for global crop irrigation goes toward rice production, which is about 30 percent of the total fresh water. On average, 300 gallons of water are required to produce 1 pound of rough rice.

Louisiana is blessed with enough irrigation capacity to meet this requirement. Irrigation expenses are significant and account for 26 percent of the total rice production cost. The average water requirement for rice in Louisiana ranges between 25 and 35 inches per acre each season. Prolonged depletion of freshwater resources could affect future generations.

Sustainability of irrigated rice production is threatened by shortages of fresh surface water and groundwater resources worldwide. In the United States, the Mississippi River Valley alluvial aquifer has shown declines in Arkansas and Mississippi. Limited irrigation water following droughts in Texas in recent years has severely affected their rice industry. Louisiana may experience short-to-prolonged droughts during the growing season.

Fresh water availability can be affected by storm surge or drought conditions in the south Louisiana canal system that can affect the quality of surface irrigation water by making it temporarily saline or alkaline. Such scenarios are possible because of climatic uncertainties. Alternative water management strategies, such as semi-aerobic, alternate wetting and drying, and furrow-irrigated rice, are being adopted as promising strategies to combat future water shortages.

Aerobic rice, as coined by the International Rice Research Institute, is synonymous to the age-old technique of growing rice under rain-fed upland conditions where the soil is never flooded. Producing aerobic rice could reduce total water use by up to 50 percent and lower water loss from leaching, percolation and evaporation.

However, studies show that rice grown in this way can have a yield reduction of up to 25 percent. The increase in the potential of diseases such as blast and the potential increase in herbicide use discourage many rice growers from adopting this water management strategy.

Another water-saving irrigation strategy the farmers could adopt is alternate wetting and drying. Low adoption of this technique may be because of its potential for reduced yield and increased management. In this system, a flood is maintained during critical growth stages such as flowering and grain filling to minimize potential yield losses. Under these conditions, little to no yield reduction has been reported.

Furrow-irrigated rice production, also known as row rice, is becoming more popular in some Louisiana parishes. This allows farmers to grow rice on fields traditionally not used for rice production because of the difference in elevations of lands.

For varieties to fit a semi-aerobic system such as row rice, they need to have improved water-use efficiency with the ability to tolerate high blast disease pressure. A few high-yielding temperate to tropical aerobic rice varieties with stress tolerance have been commercially released in the United States and globally.

Hybrid rice varieties in the United States typically have strong resistance to blast disease and have been shown to work better with furrow-irrigated production in Louisiana.

Breeding efforts to develop varieties for row rice are currently limited because drought tolerance traits are shown to have low heritability, and breeding for yield under drought is complex. Further, selecting for drought tolerance under field conditions is challenging and requires specialized infrastructures such as rain-out shelters that are used to shield research plots from natural rainfall.

Development of successful aerobic rice cultivars could be achieved by combining the high-yielding traits of irrigated rice with the drought-tolerance traits of traditional upland rice cultivars. Through funding by the Louisiana Rice Research Board, researchers initiated crosses with Cocodrie, a Louisiana-bred variety with the desired crop production and grain quality traits, with two drought-tolerant upland cultivars of Indian origin.

Preliminary greenhouse-based screening of the early-generation progenies indicated the potential of some lines to survive drought with minimal reduction in grain yield compared to non-stressed conditions. Subsequent evaluation of advanced-generation progenies has identified potential lines with high water-use efficiency that can withstand periodic dry spells under field conditions at the H. Rouse Caffey Rice Research Station in Crowley, Louisiana, and under semi-aerobic conditions at the Texas AgriLife Research Center at Beaumont, Texas.

Research is being undertaken to quantify their water-use efficiency and evaluate yield and other production traits of these lines for their suitability to alternative irrigation management schemes such as row rice. Upon yield testing of these lines to ensure adequate yield performance under favorable conditions, these lines could be useful as parents to be integrated into the routine breeding pipeline to incorporate water-use efficiency into new varieties.

Growing semi-aerobic rice is confronted with other problems that are characteristic of non-flooded field conditions. For example, weed control becomes challenging because weeds are otherwise smothered under conventional flooded conditions. Similarly, diseases seem to be more prevalent under semi-aerobic conditions.

Successful development of superior varieties to fit alternative water management schemes will reap far-reaching benefits to the Louisiana rice industry in the future. Reducing water use in growing these rice varieties under semi-aerobic, furrow-irrigated conditions would free up surface water for other uses, in addition to reducing greenhouse gas emission from rice fields.

(This article originally appeared in the winter 2019 issue of Louisiana Agriculture.)