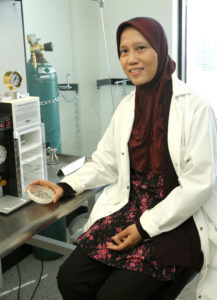 ice crops can stress under too much water or water at the wrong time. Developing tolerance to these flooding stresses and improving rice cultivars is the life passion for Dr. Endang “Septi” Septiningsih, a Texas A&M AgriLife Research scientist.

Rice growers around the world have had two choices: plant poor-yielding traditional varieties that are moderately tolerant to long periods of submersion in water to withstand the flash floods of the monsoon season, or plant high-yielding submergence-intolerant varieties that tend to suffer severe losses during the monsoons.

“Rice plants love water during most of their life,” she says. “However, if it is too deep or prolonged, water can kill plants completely submerged and unable to access oxygen. The most critical times are when the seed is germinating or when the plants are trying to grow.”

She says extreme weather due to climate change has made flooding an increasing problem for U.S. and international agriculture. Complete submergence can happen for several weeks during flash floods when the fields cannot be drained fast enough.

As a result, Septiningsih says estimates indicate flooding stress is a critical problem affecting more than about 49.5 million acres of rice worldwide.

“Since rice naturally grows in areas with plenty of water, these areas also tend to be more prone to extreme flash-flood events that can wipe out the crop,” she says. “The most feasible approach to address these types of severe floods is the development of rice cultivars tolerant to submergence that maintain agronomic, yield and quality traits acceptable to farmers.”

Working both at Texas A&M and previously at the International Rice Research Institute, or IRRI, in the Philippines, Septiningsih led the identification and cloning of a gene, the AG1 gene, which provides enhanced tolerance of prolonged submergence during germination, also known as anaerobic germination.

This novel finding has made a significant impact not only by highlighting the roles of sugar metabolism and signaling in anaerobic germination, but also by providing the foundation for future advances in direct-seeded rice production, she says. These advances can lead to improved food security and stability of subsistence rice farmers around the world. 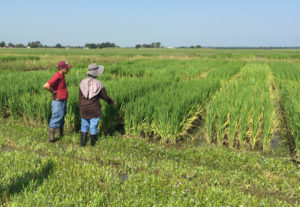 At IRRI, she investigated various types of flooding stresses in rice, including flooding during germination, complete submergence during the vegetative growth stage or flash flooding, and flooding up to harvest or stagnant flooding.

While there, Septiningsih’s research included characterizing and using the SUB1 gene. This gene greatly enhances survival of rice plants under two weeks of complete submergence.

She explained the SUB1 gene confers tolerance to complete submergence via a “quiescence” strategy. This essentially causes the plant to become dormant while completely under water. As a result, is saves the carbohydrate reserves and uses them upon de-submergence to recover fully.

“Most rice will try to keep growing to reach the water surface and will die after using up all of its energy,” she says.

Septiningsih helped employ marker-assisted backcrossing to develop SUB1 rice cultivars that could withstand complete flooding for up to two weeks. SUB1 cultivars have been released in multiple countries and additional ones have been developed by a number of national partner institutes, she says.

“My ultimate goal is to enhance the tolerance the current SUB1 rice varieties provide to allow the crop to face more extreme weather events, especially flooding,” she said. “This is increasingly problematic for the U.S. and globally.”

In 2017, Septiningsih was awarded a grant from the U.S. Department of Agriculture-National Institute of Food and Agriculture as the lead researcher to investigate the mechanisms of a novel quantitative trait locus, or QTL, for submergence-tolerant rice.

The cloning of this QTL will provide the opportunity to gain a better understanding of the molecular mechanisms underlying submergence tolerance, she says. It will also allow them to design gene-based or tightly linked markers for more precise genotyping.

In addition to SUB1 cultivars, Septiningsih also developed a number of genetic stocks and flood-tolerant lines that have been impactful for both breeding and genetic studies at national and international research institutions around the world.

Also, she says, knowledge gained may help in the translation of submergence survival strategies to other flood-sensitive crops such as corn and soybeans.

“This work will further help crop yield stability and food security among subsistence farmers around the world,” Septiningsih said.