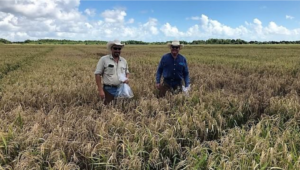 Rice delphacid, a planthopper native to Central and South America, has been found in several South Texas counties after a three-year absence.

The first report came from Galveston County in a ratoon crop of Texmati, and the grower reported patches of hopper burn. Way has since found it in Brazoria, Matagorda and Jackson counties and possibly Wharton County.

As in 2015, all of the infestations this season were west and south of Houston.

“In 2015, it came in on the ratoon rice in October, and the same thing again three years later,” he says. “We’ve monitored for it for three years and nothing until now.”

After the recent delphacid discoveries, a Section 18 crisis exemption for Endigo ZC ­— a premix of lambda-cyhalothrin and thiamethoxam — was issued. It expires Nov. 9. Endigo ZC also carries a 21-day pre-harvest interval.

Way has a theory about why the insect seemed to disappear between 2015 and this season.

“My gut feeling is that the critter’s been here for a while, maybe since 2015, and the populations were just undetected until the environment was just right,” he says.

This season, the area south of Houston where the infestation was discovered has received at least 40 inches of rain in September, so there have been prolonged periods of wetness.

In December 2017, Way traveled to the International Center for Tropical Agriculture (CIAT) in Cali, Colombia, to observe first-hand this insect and the virus it can carry that causes a severe rice disease called “hoja blanca.”

Translated, that means white leaf. Because the pest is endemic in that country, researchers can carry out field trials. For growers there, developing resistant varieties is the only economic solution.

Way says he plans to send some of the public inbred U.S. varieties to Dr. Maribel Cruz, an entomologist at CIAT, so she can rate them for field tolerance to hoja blanca and rice delphacid feeding. 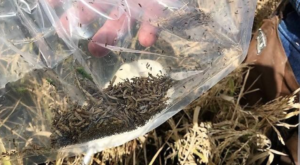 In 2015, a consultant reported symptoms of hopper burn — bronzing of the plants caused by planthopper feeding — in a ratoon rice field south of Houston.

Results from a non-randomized, small-plot insecticide experiment in a commercial field in Brazoria County suggested pyrethroids were not effective, but dinotefuran was. In fact, the trials in 2015 found pyrethroids flared rice delphacid populations.

Observations of infested fields found no difference in susceptibility among inbred and hybrid cultivars.

What caused the pest to appear in 2015 remains unknown.

Way established sentinel plots and sampled test fields weekly in 2016, 2017 and earlier this season without finding a single planthopper.

Get to know rice delphacid 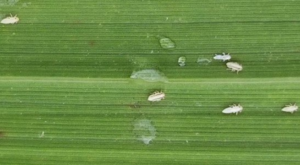 The rice delphacid uses a piercing-sucking mouth part to feed on plant phloem — plant tissue that transports nutrients, including sugar, made during photosynthesis to parts of the plant where they’re needed.

The planthopper, roughly 1/4 inch long, damages rice plants through feeding as well as egg-laying. In addition, it is an important vector of a virus that causes hoja blanca, which can cause up to 50 percent crop loss in Central and South America.

Way sent dead, preserved samples of delphacid from the 2015 infestation to Dr. Ismael Badillo-Vargas (Texas A&M AgriLife Research virologist) for analysis, and they came back as genetically similar to those found in Argentina, he says.

The planthopper, known scientifically as Tagosodes orizicolus, was reported in rice-growing areas of the Southeast United States from 1957-1959 and from 1962-64.

During that time, hoja blanca was found in Florida, Louisiana and Mississippi. But because the vector never established, the disease has not been reported since then.

Extension rice specialists urge you to be on the lookout for the pest as you scout and cut your ratoon crop.

Contact them if you suspect a rice delphacid infestation. Texas A&M’s Mo Way can be reached at 409-239-4265 or moway@aesrg.tamu.edu. LSU AgCenter’s Blake Wilson can be reached at 225-642-0224 or BWilson@agcenter.lsu.edu.