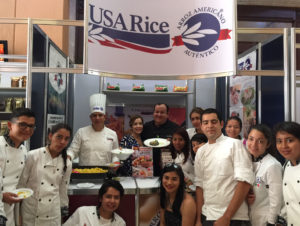 The recently negotiated United States-Mexico-Canada Agreement, likely successor to the North American Free Trade Agreement, should go a long way at eliminating incentives for Mexico to import rice from countries other than the United States. That is the conclusion contained in a recently released report from CoBank’s Knowledge Exchange Division.

For years, Mexico had been the No. 1 export destination of U.S. rice both in terms of volume and value, thanks in part to NAFTA. Before the trade agreement, Mexico accounted for 9 percent of all U.S. rice exports. Post-agreement, exports to Mexico rose to more than 20 percent.

During the past two years while NAFTA was under threat, Mexico began to look elsewhere for rice, offering duty-free incentives.

“USMCA should eliminate incentives for Mexico to diversify away from the U.S.,” according to the CoBank report. 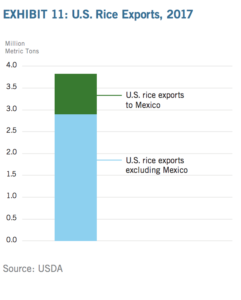 The trade agreement still has to be ratified by Congress, which is expected to take it up in 2019. Although the auto industry will see the largest changes, agriculture also has a lot at stake.

All food and agricultural products that had zero tariffs under NAFTA will remain that way under USMCA.

For sectors, such as grain, the goal of USMCA was to preserve tariff-free trade.

Dairy producers will see mixed results from the new trade agreement. Canada has agreed to dismantle its complex Class 7 milk pricing system, and U.S. dairy product access to our neighbor to the north a would increase modestly,

Mexico’s tariffs on dairy products in retaliation for U.S. steel tariffs will remain, and until lifted, will far outweigh the benefits gained through USMCA.

The pending trade agreement eases concerns for specialty crop producers, many of whom operate across all three countries. USMCA also eliminates a law that has permitted segregation of imported wines in British Colombia grocery stores.

Under the agreement, segregation will be eliminated by Nov. 1, 2019. The Canadian market comprises 22 percent of all U.S. wine exports, second only to the European Union at 52 percent of exports.