Editor’s Note: The mission of Rice Farming magazine is to provide Profitable Production Practices to farmers across the Rice Belt. As editor, I do my best to fulfill that mission in every issue. The April issue of Rice Farming is no different. What is different about this issue is that you have the opportunity to hear from a side of a farming partnership that is prevalent in rice farming country, but not often recognized. It is a partnership like the one described in this article that has what it takes to preserve the family farming operation and pave the way for the ones to follow. I had the opportunity to visit Richard Farms in Kaplan, La., this month and observe one of the most efficient, beautiful rice farming operations in the United States. Christian Richard and his wife, Julie, are sixth and fifth generation rice farmers, respectively, who love what they do and instill those same values in their children – Katherine, Saul and Landry. This is Julie’s story.

Paving the way for the next generation

I have great memories of riding on the tractor with my daddy late at night. My parents made sure we spent time with both of them regardless of season. This sometimes meant going to meet dad.

Christian and I do the same thing. I met him this afternoon to exchange papers, and I left with one less kid that I lost to his infatuation with the “big tractors!” That time is important for these three kids to not only see what we are doing but to be able to spend good interactive time with us. They come to the farm office with me, ride the tractor with dad, help bring lunches to the field and are around when we are harvesting. They do think that dad built them the biggest indoor bike rink since he built his farm shop next to our home!

They will have their own set of memories one day. I hope that no matter what they do, they carry with them an appreciation of where their food and fiber originates and help to share it with others.

I was raised on a rice, soybean and crawfish farm but was not actively involved in the day-to-day operations. I had an understanding of what was going on and the process at hand, but had no intention of making a career in agriculture. I was not in 4-H or FFA and was more involved in music, Beta, the school newspaper, etc.

When I enrolled at LSU, I thought I wanted to go to Veterinary School, and that is how I landed in the College of Agriculture. During my junior year, I realized that I liked the business and people side of Veterinary Medicine much more than the science behind the field.

Upon graduation with a B.S. degree in Animal Sciences, I was offered an assistantship doing recruitment solely for agriculture. This assistantship came with a scholarship that allowed me to obtain a Masters and a greater portion of my Doctorate in Human Resource Education with a minor in Agriculture Economics. It was during that tenure that I found my way back to production agriculture, being in small towns and interacting with students of all backgrounds, and mostly sharing the vast expanses of agriculture with them.

After LSU, I was employed by Louisiana Farm Bureau, first as a “field man” and then as the assistant director of Field Services handling leadership development of Young Farmers & Ranchers and Farm Women. Farm Bureau not only gave me valuable experiences that allowed me to grow and excel professionally, they also nominated me for the McCloy Fellowship in 2009. I was selected as one of four individuals nationally to travel to Germany and Belgium and study agriculture production and practices. This background, along with other international trips and conferences that Christian and I have been a part of, have helped open our eyes to new ideas, trends and potential market issues.

Christian and I met exactly a month after I started working for Farm Bureau. I came to a board meeting in my home parish, and he was the only person that I didn’t already know. The rest is history. His drive, innovativeness and desire for constantly educating himself were just a few of the things that made me come to love him.

I always look at a situation and think of ways to improve what we are doing and make it more effective and efficient. Christian thinks the same way about the farming operation. I understand what he is trying to accomplish, realize that my independence will come in very handy during the five to six months that we will work 16-hour days and appreciate what he is doing for us as well as the world’s food supply. I know he appreciates the late nights doing work after the kids are asleep and the sleepless nights when one isn’t feeling well.

It was not in my plans to farm, but with the birth of a second child and the stress of traveling for work, we both thought my education and abilities should start to work for us directly. I tell people often that in May of 2012 Christian took his biggest farming gamble: he hired his wife!

There is a mutual respect there for what each of us does daily and the understanding that we have to have each other’s back is key to any successful business partnership, whether that partnership involves marriage or not. He has the areas that he oversees, and I have the things that I handle. Communication is key in this type of situation and something that we try to work hard to accomplish daily.

He knows that aside from him no one has a bigger investment in this farming operation than I do. I trust him to make sound decisions, and he trusts me to make sure that all “i’s are dotted” and “t’s are crossed,” and we run as smoothly as possible. It is a team effort every day.

The biggest advantage of working for the farm and not another company is the flexibility I am allowed with my kids. I don’t miss birthdays, class field trips, school parties and little milestones in life that I may have otherwise. These three kids fall at the top of priorities for both Christian and me. The old adage of God first, family second and career third is very true in this house and on this farm. We are lucky that those three priorities go hand in hand for us. 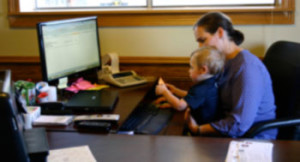 The responsibilities that I have with the farm are fairly flexible. Although paperwork, insurance, licenses and legal documents may have deadlines, I can do most at times that are optimal for all of us, kids included. The kids don’t always get my undivided attention, and they do have to do things that may not be as fun as watching Disney channel or playing like their friends do, but they have 4,300 acres to plow with their toy tractors; they have a moving office to ride in and play “I Spy,” and they will have real-world knowledge that few could only hope for. Even the not-so-fun stuff is fun if you approach it in the correct manner.

I get asked often if I think our kids will take over the farm. First, although my second child has more of an interest in the farm than most kids do, they are way too young to make that call. They go to school a few days a week in the nearby city and interact with a diverse group of people, the majority of which have no idea about what we do. They take gymnastics, play ball, love the zoo and are just like every other young child.

I want them to experience an array of things in their lives and be able to choose their own paths. I ultimately want them to be happy in whatever their chosen profession is and the choices they make to live out that dream.

If you had asked me at 18 if I would be farming, I would have laughed at you. This is our dream, and we are getting to live it everyday. They deserve the same thing.

They definitely like their lifestyle, but I don’t think they truly understand how blessed they are. Christian and I have truly been blessed – three healthy and happy babies, a productive and growing farming operation and opportunities to do and see things that many will never get to experience. At the end of the day, I can only hope that these three children are grateful for what they have been given, appreciate the origin of their food and clothes and live out their dreams.

A Long Tradition In The Rice Industry

Both sides of Christian Richard’s family have a long tradition in the rice industry, too. As a rice farmer in south Louisiana, he represents the sixth generation. His father’s family worked for Riviana Foods when it was located in Abbeville, La. His grandmother was a bookkeeper for the Godchauxs, and his grandfather was a rice buyer. Today, his uncle on his father’s side is also a rice buyer.

On his mother’s side, his grandfather and his uncle farmed rice near Kaplan where Christian attended elementary school. He attended high school in Abbeville and later graduated from the University of Louisiana at Lafayette in 2000 with a degree in Ag Business.

“When I was born up until I was four-yearsold, we had five generations that were alive,” he says. “While I was in high school and college, my grandfather gave me a small crawfish farm. I would go to school in the morning, then come home and run crawfish traps in the afternoon.

“After graduating from college, I put in my first rice crop in 2001. At that time, I had about 200 acres of rice and some crawfish. In 2005, my grandfather split his farm and gave half to me and half to my uncle.

“After Julie and I met at the Farm Bureau meeting, we married in 2008,” Christian adds. “At that time, the farm consisted of about 2,000 acres, including 900 acres of rice. Later on, a couple more tracts became available, which then allowed us to increase our acreage.

“When Saul was born, Julie resigned from her job at Farm Bureau, and we started farming together. It was a tough decision for her, but that’s what she wanted to do.”

In 2011, Christian and Julie picked up 16 acres adjacent to their home, where they subsequently built several grain bins, a farm shop and an office.

“At that point, everything was falling into place,” he says. “Today, we farm 4,000 acres – 2,000 acres of rice, 1,500 acres of soybeans and 500 acres of crawfish. But I never just farmed. I always had other things going, too, because in south Louisiana, rice farmers typically are unable to diversify by planting other crops.

“Right now, I have three trucks that I use for contract hauling, do some custom planting and grow crawfish. This is the only way we can diversify in this area and build an operation that might be attractive to our children in the future.” – Carroll Smith