Arkansas’ 2020 season had its ups and downs but finished on a profitable note. 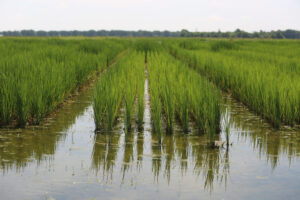 Throughout the late winter and early spring, wet weather across much of the Southern Plains prevented almost all early planting of Arkansas rice, including these field trials — photo courtesy University of Arkansas

It almost goes without saying that 2020 will be a year to remember — even if many across the country may already be dreaming up ways to forget it.

For Arkansas rice growers, the year proved to carry burdens both familiar and novel. Throughout the late winter and early spring, wet weather across much of the Southern Plains prevented almost all early planting in Arkansas rice. As March rolled into April, the COVID-19 pandemic began complicating agricultural practices both on and off the farm.

Jarrod Hardke, Extension rice agronomist for the University of Arkansas System Division of Agriculture, said 2020 had originally given rice growers cause for optimism.

“The year was set up to make a major move up in rice acres,” Hardke said. “Rice prices were good, while soybean and corn prices were low. Also, our rice stocks situation was very tight due to low production acreage in 2019.

“My expectation was that we would see at least 1.5 million acres,” he said, adding that a record acreage of 1.8 million acres didn’t seem out of the question early in the year.

But persistent rainfall throughout the planting season pushed those high acreage goals off the table. Ultimately, Arkansas growers harvested about 1.44 million acres of rice in 2020.

“Persistent wet weather was easily our biggest planting season issue,” Hardke said. “Rainfall event totals were often lower than those in 2019, but it rained more often in 2020. It seemed like we had planting windows of only two to three days at a time. Wide windows just didn’t present themselves to make a large run.”

Temperatures also played a role, with one of the colder Aprils on record, requiring longer drying times after rainfalls. The summer that followed was relatively mild, which in turn slowed the growing process.

“Sometimes that was a good thing, making some management easier,” he said. “But it delayed harvest.”

As with most agricultural efforts, Arkansas rice was affected by the record number of hurricanes and other storm systems that rolled through the Gulf of Mexico in 2020, often pushing wind and rain into the Southern Plains region and beyond.

“From Cristobal in early June, which actually left us fairly dry for six to eight weeks after it departed, to the stack of hurricanes in the fall, tropical storms are the story of the year,” Hardke said. “Lodging and milling were on everyone’s mind for the entire fall.”

In the end, lodging took a relatively minor toll on the Arkansas rice crop. Mild weather in the fall allowed grain to dry slowly. That made for a slow harvest, he said, but also made for generally favorable milling yields.

Profitable in the end

In spite of the year’s uphill battle, the 2020 crop actually proved profitable for Arkansas rice growers as a whole.

“Rice prices have held up to make 2020 a profitable year for growers,” Hardke said. Although some economists initially predicted that prices would continue to rise with the approach of winter, prices have actually remained static throughout December.

He said Arkansas rice acreage in 2021 will likely decline from 2020 numbers if market prices remain strong for other commodities.

“Soybean and corn prices have now surged into strong competition with rice acres for 2021,” Hardke said. “Rice acres at this point can be expected to decline slightly, but if those competing commodities remain strong or strengthen in price, then it will push rice further down. Right now, a 5% to 10% decline in rice acres is my expectation. Should soybean prices climb higher, then rice acreage will decline further.”

Row rice, the practice of growing rice using furrow irrigation rather than submerging the plants in a controlled flood, continued to see increased interest — and acreage — from Arkansas growers in 2020, with an estimated 200,000 acres planted with the method statewide.

“Results were variable as growers continue to learn and adapt to the practice,” Hardke said. “However, once again results were positive overall. So as a percentage of production, it seems likely to continue to increase in 2021.”

Print & E-mail
arkansas hurricanes university of arkanss 2021-01-15
Vicky
Previous: LSU AgCenter experts review 2020 rice season
Next: The industry has had enough changes for a while