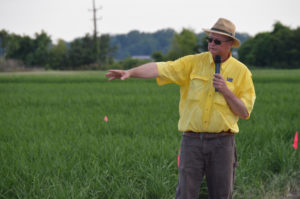 “We are set up for cotton, corn and beans, and if there is an opportunity to diversify that makes sense, I’m interested in it,” said Tensas Parish farmer Kellon Lee.

VandeVen, who has farmed traditional rice for 12 years and row rice for five years, said row rice is a good option for first-time rice growers to gain experience because it does not require a long-term commitment.

“There is no one here who can’t do it and be successful at it. You just need a plan up front,” he said.

Fertility a work in progress

“With row rice, we’ve learned you need to spoon feed it — I’m talking five applications at 60 to 80 pounds each time — which is not much more fertilizer but a heck of an airplane bill,” he said.

AgCenter agronomist Josh Copes said results from a rice fertigation project that adds fertilizer to irrigation water on the station is not without challenges but may prove to be beneficial in cost savings in the long run.

“A mix of nitrogen fertilizer and water at a ratio of one-to-one applied to a wet field has been important,” he said.

”It is a work in progress,” said AgCenter extension agent R.L. Frazier, adding that fields are watered just like a cotton, soybean or corn crop.

“Use soil residual herbicides as often as possible,” Copes said, “There are too many opportunities after wetting and drying for germination to occur.”

Producers should select rice varieties resistant to rice blast, a disease that can affect any part of the plant and cause serious damage, said AgCenter plant pathologist Trey Price.

“There is a tight window when you can try to control the disease,” Price said, adding that fungicide management for rice blast is similar to a wheat scab fungicide application.

Because rice blast will overwinter in crop residue, crop rotation plays an important role, Price said, adding that producers in the northeastern part of the state have more options than rice growers in south Louisiana.

A soybean rotation can increase the incidence of sheath blight in rice and may not be the best plan, Price said. But corn, cotton or other crops well-suited for the ground where rice is planted could be considered.

“We see economic returns consistently where we see a seed treatment versus where there is none,” Brown said.

Arkansas is currently fighting the rice billbug, an insect that cannot survive in an aquatic environment and is typically found on levees in rice fields.

“We are farming a rice system that is not saturated or under permanent flood conditions, which offers a prime opportunity for billbugs to come in and start damaging rice,” Brown said, urging producers to notify the AgCenter if any billbugs are spotted in their fields.

Other presentations from the field tour included:

Karol Osborne is communications coordinator at the LSU AgCenter. She may be reached at KOsborne@agcenter.lsu.edu.