Fungicide-resistant sheath blight should be a wake-up call to follow resistance management rules regardless of where you farm. 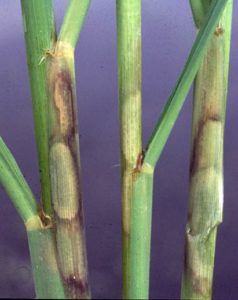 Resistance of the sheath blight pathogen to the popular strobilurin fungicides continues to increase, encompassing roughly half of Louisiana’s rice acres as well as one confirmed field in Mississippi.

Although strobilurins still provide good sheath blight control in fields without resistance, the growing issue should reinforce the need to follow sound resistance-management practices, says Louisiana State University AgCenter plant pathologist Don Groth. They include scouting fields to identify the disease, applying the right product at the correct rate and at the proper timing, and rotating effective modes of action.

But rotating effective modes of action may be a challenge, since only two other fungicide families are registered for sheath blight control in rice — SDHIs and DMIs. And researchers have detected one case of sheath blight resistance to SDHIs in Louisiana.

“When I saw those numbers coming out of the testing and saw the resistance, I was really depressed for a while because the strobis are such a useful tool for rice,” says Groth, also resident coordinator of the AgCenter’s H. Rouse Caffey Rice Research Station in Crowley. “They’re highly effective, have low use rates and basically disappear off the crop by harvest time. You can’t ask for any better fungicides.”

He suspects much of the resistance developed from growers using the fungicide as a type of “cheap insurance,” whether they needed it or not. Event though they may have only applied it once per season, they used the same mode of action every year repeatedly, selecting for organisms that could withstand treatment.

“From what I’ve seen with all of the rice strobis and some of the ones used on soybeans, it seems like there’s cross-resistance to other strobis from failed performances,” he says. “If you have the strobi resistance, you’re going to get almost no activity. I just prefer growers rotate to some other mode of action to break it up.”

Yeshi Wamishe, University of Arkansas Extension plant pathologist, conducted baseline studies when strobi resistance was first detected in Louisiana to gauge sensitivity of the organism to the fungicide in Arkansas.

They were susceptible, and Wamishe says she hasn’t heard any complaints since then from growers or consultants about the fungicides having reduced efficacy.

Strobi-resistant sheath blight also has been confirmed in one rice field in the central Delta of Mississippi, says Tom Allen, Mississippi State University Extension plant pathologist. The producer had made two fungicide applications per season the past few years with a premix that contained a strobilurin and another fungicide to likely pick up kernel smut.

Like Groth, Allen says, “If one particular fungicide within a fungicide class, Group 11 in this case, results in resistance, then the remainder of fungicides within that specific class of fungicides will not work to manage the sheath blight fungus.”

Instead, Allen says growers will need to turn to an SDHI, creating a situation where those with resistant sheath blight are down to a single mode of action.

The two SDHIs, or Group 7s, currently registered for rice are Sercadis from BASF and Elegia from Nichino America.

Although the products are very active against strobi-resistant sheath blight, Groth says they are narrow spectrum and don’t pick up many of the other problematic rice diseases. 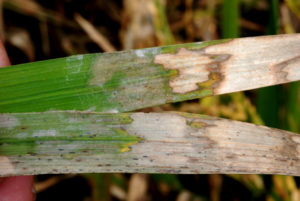 Progression of sheath blight development with younger lesions on the top and older on the bottom.

LSU AgCenter researchers have detected one case of sheath blight resistance to an SDMI in the state, Groth says.

“From what I saw in the field, we suspect resistance but it’s not at the same level as strobis,” he says. “We saw small spots out there, but it still had a lot of activity.”

Other fungicides in the works

Amistar Top, a premix of azoxystrobin and difenoconazole from Syngenta, was registered for use on rice in time for the 2018 season. It contains a Group 11 and a Group 3 fungicide.

Groth had conducted trials with the premix for four or five years before that and had seen excellent sheath blight control as well as activity on rice blast and Cercospora.

But in 2018, he says, it didn’t perform as well, leaving him disappointed. The on- and off-station trials were conducted using a backpack sprayer, and applications to commercial fields are typically flown on by planes.

Even with applications made with a ground rig, he says the premix didn’t perform as well.

Groth says he plans to look into the issue this year to determine whether it might be environmental or a thicker canopy. He also plans to look at surfactants to aid canopy penetration, different application technologies, different tankmixes and earlier timings at PD+5 rather than waiting until boot.

But the outlook for additional modes of action being brought to the rice market to control sheath blight remains slim.

“I’m hoping we have enough products because there aren’t many in the pipeline,” Groth says. “I’m not hopeful we’ll get Sercadis back. I’m hoping we can get Amistar Top to work correctly, and that will help us a lot.”