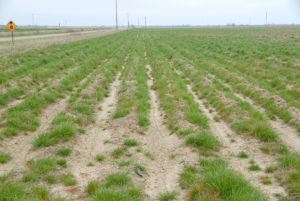 Populations of glyphosate-resistant Italian ryegrass, such as this photographed in Washington County in 2010, have been found in at least 31 Mississippi counties – photo courtesy Mississippi State University

Although fall-applied residual herbicides are recommended to control glyphosate-resistant Italian ryegrass, some can be detrimental to the following year’s rice crop, according to recently published research.

The researchers looked at the effects of labeled rates and twice the labeled rates of clomazone (Command), pyroxasulfone (Zidua), S-metolachlor (Dual Magnum) and trifluralin (Treflan) in the fall before rice seeding. Of those, only clomazone is labeled for use on rice.

The plots also were taken to yield. Applications at the 2X rates of pyroxasulfone, S-metachlor and trifluralin reduced rough rice yields compared to clomazone.

Based on their trials, the researchers say, “Of the herbicides evaluated, only clomazone should be utilized as a fall-applied residual herbicide treatment targeting GR Italian ryegrass before seeding rice.”

Their work, “Effects of Fall-Applied Residual Herbicides on Rice Growth and Yield,” appeared in the Weed Science Society of America’s “Weed Technology.”