Stand establishment can make or break a crop

South Louisiana rice farmers dodged big rains and continue planting. But they are advised to drain water from drill-seeded fields to promote germination. 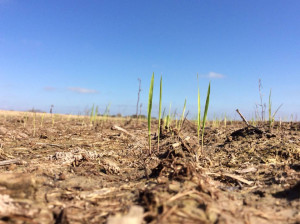 The Clearfield hybrid XL729 pushes out of the ground March 14 in Jeff Davis Parish, La.

The unexpected rains in early March have delayed rice planting in some regions, but in South Louisiana, some growers began planting as early as late February.

These growers have put in a extra work due to the rainy weather, but thankfully those who use a water-seeding system are still looking good so far.

Spring arrived earlier this year, and soil temperatures were higher than normal in early March. Much of the rice was planted ahead of the storm that was predicted to drop 8 to 10 inches of rain in those areas.

Luckily, most areas where rice was planted did not receive more than 3 inches of rain, and many areas received only 1.5 to 2 inches.

“Many last-minute decisions have to be made when planting rice,” says Cullen Minter, RiceTec field representative. “Those decisions can determine success or failure in stand establishment, which is the building block for producing a profitable crop.”

When rice planting started in late February, little rain was forecast. So farmers were planting to moisture.

This allowed most of the earliest planted rice to take up oxygen and moisture and start to germinate before it rained. Those fields are now marking rows and progressing nicely. In the fields planted closer to the forecasted rain, RiceTec recommended planting the seed as shallow as possible, while still covering it.

“This form of planting allows the seed to take up oxygen sooner as the fields are drained and begin to dry,” Minter says. “One of the problems seen in 2015 was seed being submerged too long and rotting in the ground deprived of oxygen needed for germination.

“Drilling as shallow as possible before a large rain event is a way to mitigate the problem of flooding.”

Rice seed needs moisture, oxygen and adequate soil temperature for germination to begin. Water seeding rice differs from drill seeding due to a layer of oxygen at the soil surface in a flooded field.

This layer of oxygen allows the seed to begin germination while submerged in a water-seeded system. In drill-seeded rice, the seed is deprived of oxygen beneath the soil surface in a flooded field and will not start to germinate until the soil begins to dry.

“Draining, pumping, puddling or doing whatever it takes to get the water off the field is very important after all this rain subsides,” Minter says. “We’re happy to see that rice farmers in the South Louisiana area who drilled are starting to see good looking stands.”

Information for this article was provided by RiceTec.