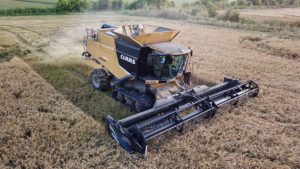 Scott Savage, who farms with his family near Bay City, Texas, took this picture of the 2019 rice harvest using a DJI drone.

Texas rice growers faced a challenging 2019 due to early and late-season rains, according to a Texas A&M AgriLife Research expert.

Dr. Ted Wilson, Texas A&M AgriLife Research and Extension Center director, Beaumont, said reports on yields and quality are too preliminary to determine likely outcomes, but he expects a below-average year due to late plantings and late rains that included flooding in Texas’ rice-growing regions.

Yields in recent years have averaged around 8,000 pounds per acre, Wilson said.

The effects of late plantings and Imelda are still unknown because harvest surveys from producers, which help assess yields and quality, are only now coming in, Wilson said.

As of Sept. 27, around 97% of the main rice crop had been harvested, Wilson said. But rains from Tropical Storm Imelda delivered up to 40-plus inches of rainfall along rice-producing areas of southern Texas.

“Wet springs tend to delay planting. For every week of delay, there is a yield penalty because an increasing amount of grain is produced when there are higher nighttime temperatures, which reduces rice plant’s efficiency,” Wilson said. “Now there are questions about a good portion of the ratoon crop, especially if there was lodging due to mud.”

Most rice planting in Texas usually occurs by the last week of March or first week of April west of Houston and the second to third week of April east of Houston, he said. But there were reports of planting as late as June, and some producers missed their window to plant altogether.

“Our research shows you lose 310 pounds per acre per week each week harvest is delayed due to higher nighttime temperatures chewing up plant energy,” he said. “So if you were planting in June east of Houston, that’s eight to nine weeks times 310 pounds per acre. Those are considerable losses.”

Wilson said individual growers did very well this year, but crop performance will likely depend on location, planting and growing conditions and any other challenges.

Pests were localized in Texas rice this year, but diseases like kernel smut impacted several producers, Wilson said. The fungal disease has become progressively worse over the past five to six years.

“It hurts grain, and some individual fields where kernel smut was found had loads of rice rejected by driers and mills,” he said.

Narrow brown leaf spot is another disease that is increasing in severity and is affecting yields, Wilson said. There is no highly effective treatment for brown leaf spot.

“I’m very impressed with Texas rice growers, but when you face challenges like those presented this year, it can be difficult,” he said. “Hopefully there weren’t too many losses from Imelda, and the ratooned crop does well.”