2016 will not soon be forgotten in Louisiana but for the wrong reasons – historic flooding, reduced quality and significantly lower yields. 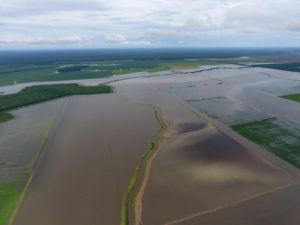 There are rice seasons where high yield, milling, quality and prices will forever be remembered by rice farmers. Following good years, new farm trucks, tractors and combines can be seen across rice country. The 1972 season always comes up in conversation with the older-generation Louisiana rice farmer as being one of the most profitable seasons ever. This is also the year I was born. Coincidence? Fate?

Probably not. But the 2016 rice season also will be remembered for years to come but for all the wrong reasons.

Starting on a high note

The 2016 rice season actually began on a high note. On Jan. 5, AV-1011 was granted a “conditional” registration under section 3(c)(7) of the Federal Insecticide, Fungicide and Rodenticide Act by the Environmental Protection Act. AV-1011 is a bird repellent that discourages feeding by blackbirds on treated rice seed. Blackbirds can be a serious problem here in Louisiana, especially in early planted rice.

In fact, a flock of blackbirds can devour a freshly seeded rice field in a matter of hours. Before the Section 3 registration, we worked every year for almost a decade to obtain a Section 18 emergency exemption, and we never knew if or when we would receive the Section 18 from EPA.

The 2015-16 winter was very mild, and warmer-than-normal weather occurred earlier in the spring. Because of this, rice planting in southwest Louisiana began in earnest the last week of February with several hundred acres being drill-seeded even before the first day of March. About 30 percent of the acres in southwest Louisiana were planted before March 10.

This was significant because the recommended planting window in southwest Louisiana is March 10 through April 15. But when the soil is dry and air and soil temperatures are adequate to plant, it is hard to wait for a day on the calendar.

Rain and overcast weather moved into southwest Louisiana in mid-March and seemed to hang around for much of the month as well as April, which slowed further planting, submerged and stretched rice seedlings, and made many early season ground-applied herbicide and fertilizer applications difficult.

Northeast Louisiana got hit hard during these rains with many growers reporting 23-plus inches in a three-day period. Many acres in northeast Louisiana flooded, and low-lying areas were inundated with backwater flooding that stayed around for weeks. 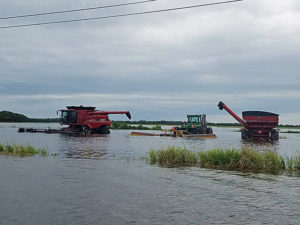 While there was not much rice planted at the time, the flooding and consistent rainfall delayed planting. Almost all the rice in northeast Louisiana was planted during the first week of May.

The weather dried up in May, followed by wetter weather in June, increasing sheath blight pressure in many rice fields. Strobilurin-resistant sheath blight fungus continued to spread in 2016. SDI fungicides, such as Sercadis and Elegia, are typically recommended where strobilurin resistance has previously been found. Unfortunately, it appears some resistance is developing to these fungicides as well.

In 2015, we saw significant leaf blast in Jupiter early in the season. In 2016, this was not the case, and blast overall was not as prevalent. Although Cercospora was relatively minor in the main crop, it was predominant in the ratoon crop and late-planted rice. With prolonged heat late in the season, bacterial panicle blight was expected to be bad but it never really materialized. However, we did see an increase in black kernel smut in Louisiana this year. 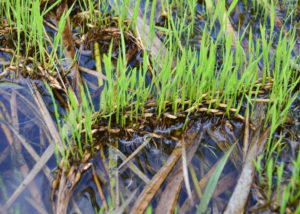 Panicles of rice that had been submerged began sprouting. Even some on standing heads began to sprout because of intermittent rains and high humidity—photo by Bruce Schultz, LSU AgCenter

During rice flowering, high nighttime temperatures occurred frequently, which is never good for rice yield, milling or grain quality. As it turned out, early yields from southwest Louisiana tended to be about 8 percent lower than expected. From there, it only got worse.

Historic flooding occurred in southwest Louisiana with many reporting more than 24 inches of rain in a 36-hour period on Aug. 12 and 13. The initial flash flooding was disastrous. What was worse was the backwater flooding that crept over fields several days later and remained stagnant for a couple of weeks.

About 35 percent of fields were unharvested at the time of flooding. Flood damage varied from field to field, with some rice being completely submerged for hours to weeks. In other fields, flooding never reached the heads, and some fields on higher ground were not affected at all.

In the end, a significant amount of unharvested rice lodged, and grains on the panicle sprouted. Sprouting even occurred on standing rice that was never submerged because of high heat and constant humidity.

Quality and milling for the harvested rice decreased dramatically in some cases but held up in others following the flood. Many ratoon acres were also lost where the stubble was killed. The overall ratoon crop yield was down for the year.

Initial economic estimates indicated that the August floods accounted for more than $68.9 million in losses to the Louisiana rice industry. Although northeast Louisiana did not flood, many acres were not harvested on time because of the wet soils.

If you couple that with the already late-planted crop and high heat and rain showers during flowering, you have the perfect equation for low average state yields.

Many estimate that total yields this year in Louisiana were down 12 to 15 percent from expectations.

What does this mean for rice acres next year? In 2016, we began with a large beginning rice stock carryover. The size of the 2016 U.S. rice crop increased by 15.4 percent above what we saw in 2015.

This means that we will have an even higher ending stock carryover for 2017. Rice prices are currently down and seem to be in the $9.20-$10.20 hundredweight range, with an average selling price of about $9.70 cwt so far.

With the increased crop size and carryover, I would not expect rice prices to rebound anytime soon. With that analysis, you would expect to see rice acres decrease for 2017, right?

Unfortunately, that is probably not going to happen unless something dramatic happens to corn and soybean prices.

Currently both corn and soybean prices are also down. When you factor in the Farm Bill PLC (price loss coverage) payments for rice, rice actually pencils out more favorably than corn and soybeans. Unless those two crops make a dramatic rebound before next spring, I would expect rice acres to remain much the same in 2017

Dr. Dustin Harrell is a research agronomist and state rice Extension specialist based at the H. Rouse Caffey Rice Research Station in Crowley, La. He may be reached at DHarrell@agcenter.lsu.edu.