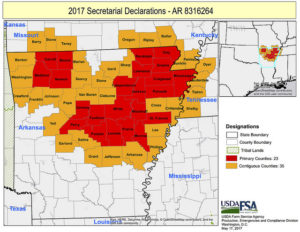 The counties in red are considered primary disaster areas; the counties in orange are contiguous and also are eligible for FSA loans.

U.S.  Secretary of Agriculture Sonny Perdue has declared 23 counties in Arkansas as declared disaster areas, making growers and other property owners in those counties eligible for emergency loans through the Farm Service Agency.

The declaration was issued May 24 by Perdue and announced May 26 by Arkansas Gov. Asa Hutchinson. The declaration from the U.S. Department of Agriculture is different from a presidential disaster declaration, which requires the Federal Emergency Management Agency to complete its own damage assessments.

The USDA declaration includes 23 primary disaster counties as well as those contiguous to the primary counties.

Assessments from economists, agronomists and other experts with the University of Arkansas estimate agricultural losses from rain and flooding between May 8-12 at approximately $175 million and affecting about 360,000 acres, according to a university news release.

Extension personnel will continue to revisit those assessments as floodwaters gradually recede and individuals are better able to assess damage to roads, levees, irrigation pumps and other equipment that have been submerged or saturated for several weeks.

Eric Wailes, University of Arkansas distinguished professor of agricultural economics and business, says Cooperative Extension Service agents throughout the state will continue to help growers assess damage to their fields, crops and equipment so that they can be better equipped to seek financial assistance from FSA if they so desire.